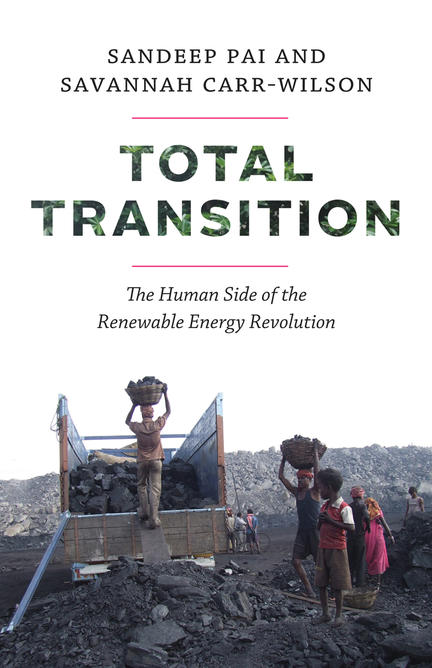 Follow the journey of a Canadian and Indian couple, Savannah and Sandeep, as they travel the world to capture the human side of one of the biggest energy transitions of our times – the global shift from fossil fuels to renewables.

In this exciting and provocative new book, readers are taken into the homes of the coal miners who live and work in Jharia, a town in India that has been on fire for the past 100 years due to poor coal mining practices. Life in Jharia is a version of Dante’s inferno – 700,000 people live in the most unimaginable conditions. Yet even though residents of Jharia say they are dying slowly every day, they also say they’ll never leave. Almost 11,000 kilometres away, in the Canadian oil sands, workers and indigenous people similarly describe their complex relationship with the industry that employs them. Although fossil fuel extraction is harming the environment and impacting people’s way of life in the oil sands region, a much-needed shift to renewable energy could also leave communities without their livelihoods.

Written in the form of a travelogue, Total Transition provides a whirlwind look at the global growth of renewable energy – highlighting exciting developments in solar and wind energy in Canada, India, Africa and Europe, and discussing hurdles standing in the way of a total transition. Energy experts and leaders of innovative renewable energy projects share hope and optimism about the future of fossil fuel workers and their communities in an increasingly renewable world.

Sandeep Pai is an award-winning investigative journalist and researcher. During his journalism career, he has worked for the special investigation teams of several of India’s leading English-language newspapers. He has written extensively about the impacts of fossil fuel extraction, renewable energy and rural development. In 2016 he was awarded the Ramnath Goenka Excellence in Journalism Award, India’s most prestigious accolade for investigative reporting. Currently Sandeep is pursuing a PhD at the University of British Columbia, specializing in energy and the environment in Asia and Africa. Prior to UBC he completed an Erasmus Mundus Master of Environmental Sciences, Policy and Management, jointly taught at Central European University, Hungary, and Lund University, Sweden. He also holds an engineering degree and postgraduate diploma in journalism, both from India. Sandeep Pai lives in Vancouver, BC.

Savannah Carr-Wilson is an international researcher and lawyer working in the field of public interest environmental law in British Columbia. Passionate about protecting the global environment, Savannah has worked in environmental law and policy not only in Canada but also internationally with the United Nations Economic Commission for Europe, Secretariat of the Water Convention, and the German non-profit Welthungerhilfe. She has authored several influential reports and publications on environmental topics ranging from the impacts of fossil fuel extraction to the intricacies of water law and policy. She studied law at the University of Victoria, specializing in environmental law and sustainability, and recently completed an Erasmus Mundus Master of Environmental Sciences, Policy and Management, jointly taught at Central European University, Hungary, and Lund University, Sweden. She also holds an undergraduate degree in politics and history from Jacobs University in Bremen, Germany. Savannah Carr-Wilson lives in Vancouver, BC.

[Total Transition] is a lucid, accessible account of the bind in which many fossil fuel industry workers find themselves, as well as an exciting and fundamentally hopeful sketch of some attempts to solve the problem of just transition.

[Total Transition] is an important contribution to the work on environmental justice and on 'just transition'.