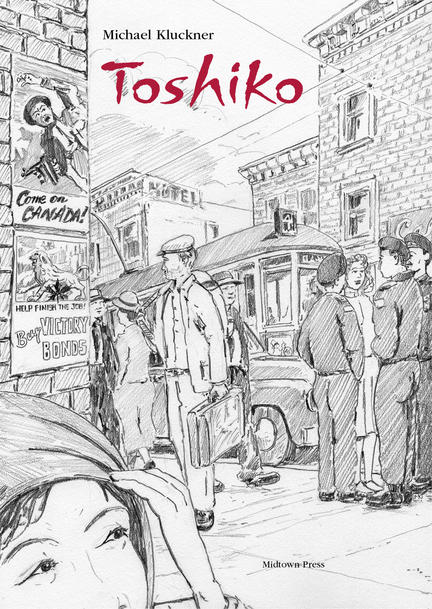 Wartime, 1944, in the British Columbia Interior – a farm boy becomes curious about the predicament of two Japanese-Canadian teenagers marooned on a nearby farm with their families, unable to live in their former homes on the coast. His friendship with the girl, Toshiko, blossoms into a kind of Romeo-and-Juliet romance, then a scandal. Thrown out of his house by his racist father, he sets off with her on a freight train bound for Vancouver.

Michael Kluckner is a Canadian writer and artist. His early books on the history of Canadian cities, heritage, planning issues, and art, include Vancouver The Way It Was, Vanishing Vancouver, Paving Paradise, and British Columbia in Watercolour. He has won numerous awards, including the Duthie Prize, the Vancouver Book Prize, the Toronto Book Prize (short list), the Hallmark Society (Victoria) Award of Merit, and the Heritage Canada Medal of Achievement. In 1991 Michael was the founding president of the Heritage Vancouver Society. From 1996 until 2001, he was the British Columbia member of the board of governors of the Heritage Canada Foundation, and served as chair from 1998 to 2000. Michael chaired the Vancouver Heritage Foundation in 2002-3. He received the Queen's Golden Jubilee Medal in 2002 for the contributions made, through books and volunteer efforts, to increasing awareness of Canada's heritage and culture.

Other titles by Michael Kluckner

Artwork of Vancouver and Beyond

Narratives of Demolition and Revival

A Year at Killara Farm