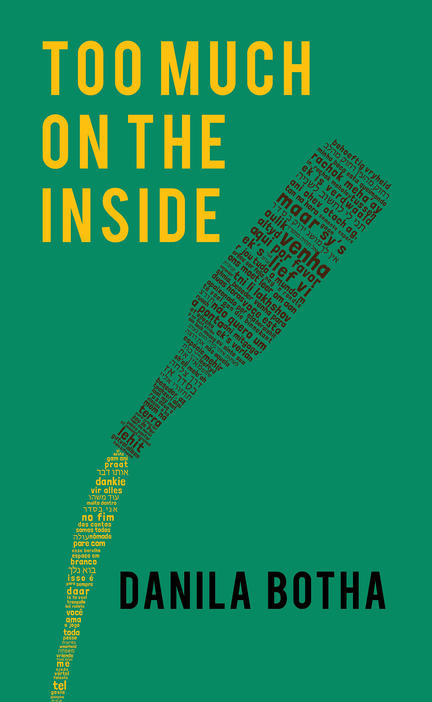 Too Much on the Inside explores the depths of coincidence and human connection, as they collide with the impossible task of forgetting the past. Three immigrants, and one Canadian from rural Nova Scotia , all in their twenties, are soon to discover their interconnected fates. They are world travellers, escapists and dreamers, at a crossroads on Toronto 's Queen Street West , the setting for this novel and its quartet of voices. While each will experience love, culture shock and joy, it's their unique periphery that draws readers into their emotional worlds and orients them to the realities of life in countries as diverse as South Africa, Israel and Brazil. Too Much on the Inside is a human cross-section of romance, solitude and perseverance in the vein of such contemporary novels as Jennifer Egan's A Visit from the Goon Squad, Camilla Gibb's family saga The Petty Details of So and So's Life, and J.M. Coetzee's Disgrace, mixed with Botha's own sensitive style and charm.

Danila Botha is a fiction writer based in Toronto. Born in Johannesburg, South Africa, she studied Creative Writing at York University and at Humber College’s School for Writers. Her first book, a collection of short stories called Got No Secrets (Tightrope Books, 2010) was praised by the Globe and Mail: “The force of the writing is formidable … the staying power lies in Botha’s carefully inflected first person narration.” It was also published in South Africa (Modjaji Books, 2011). Danila has guest-edited the National Post’s “The Afterword,” and her short stories have appeared in Broken Pencil’s fiction issue, Douglas Glover’s Numero Cinq Magazine, and the Adroit Journal. Too Much on the Inside is her first novel.

"Danila Botha's writing is both tenderhearted and sharp in all the best ways. In Too Much on the Inside there is so much to admire."Zoe Whittall, The Best Kind of People "Danila Botha's debut novel tells the extraordinary story of four individuals whose lives intersect in Toronto's Parkdale neighbourhood. The narrative, which is constructed in alternating first-person voices, reveals a deep understanding of human nature" Safa Jinje, Quill and Quire "Too Much on the Inside deserves praise for representing Parkdale's cultural vibrancy and diversity...There is an admirable freshness and enthusiasm in Botha's writing, qualities that do not inhibit her ability to describe dark and even violent events." Amy Lavender Harris, the Literary Review of Canada "Set in Toronto's gritty Parkdale neighbourhood, the story burrows deep inside the heads of four twenty somethings as they fumble through tumultuous relationships in the hopes of finding happiness in their adopted home...despite its violence Too Much on the Inside is a tender love story" Sue Carter, Metro News "Too Much On The Inside is a multi-narrated elegy to Toronto's Queen West neighbourhood that is both candid and wise." Marissa Stapley, The Toronto Star "Danila Botha's greatest achievement lies in the power of her highly authentic portrayal of these disparate voices...Too Much on the Inside will surprise you with its insights and comfort you with its wide appeal." Susan Carolan, Broken Pencil Magazine "Full of energy, enthusiasm, and compassion...Botha seems to have bottled youth in this book, with its four narrators all facing Toronto as relative newcomers trying to deal with their prior lives... these are powerful voices, fizzing and competing to be heard."Alix Hawley"This is an insightful and compassionately written novel...This is very much a Toronto (and a love letter to Queen West) story....I recommend this book. Its characters will stay with me for a long time."Farzana Doctor

Other titles by Danila Botha

For All The Men (and Some of The Women) I've Known

City Books and Too Much on the Inside, a list by Danila Botha

City Books and Too Much on the Inside

Danila Botha on the books that inspired her to write about life in the city in her new novel, Too Much on the Inside.