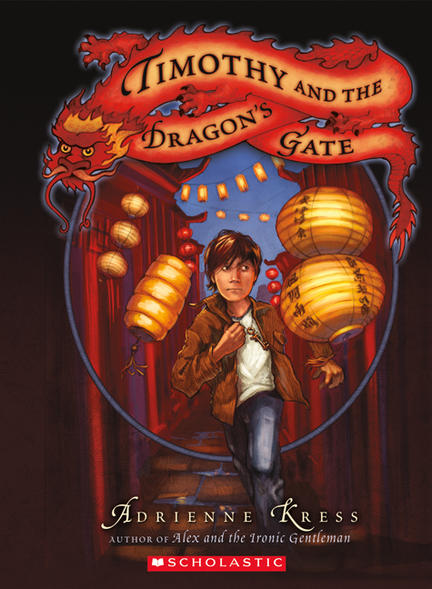 Eleven-year-old Timothy Freshwater has been expelled from every school in his city. With nowhere else to go, he joins his father at the Tall and Imposing Tower of Doom and lands himself an (unpaid) internship with Evans Bore, a hopelessly awkward CEO who hasn't been invited to single fancy party in his entire life. When his father is called away on business, his real education begins. Left in the care of an eccentric neighbour named Mr. Bazalgette, Timothy learns some curious facts about Mr. Bore and his unusually loyal mail clerk, Mr. Shen--facts that lead to unbelievable revelations: about dragons, servants, and the laws that bind them. With time running out, Timothy takes it upon himself to change one dragon's fate, and begins an adventure that will not end until he is relentlessly pursued by a pack of blood-thirsty black cabs, a crazed ninja and the most feared pirate in the South China Sea! This stand-alone read is the perfect introduction to Adrienne Kress' wild imagination. Those readers who loved her first book, Alex and the Ironic Gentleman, will rejoice in the reappearance of Alex, Captain Magnanimous and the peculiar Jack Scratch.

"Quirky, hilarious, and genuinely exhilarating.... Alex is a wonderful hero who deserves to return for further adventures." --Eoin Colfer, bestselling author of the 'Artemis Fowl' series

Timothy and the Dragon’s Gate

“I can do it,” said Timothy, “I just don’t want to do it.” “Please?” Mr. Shen spoke quietly and yet his voice pierced the room.

When author Adrienne Kress wants her characters to make a point, she turns down the volume so that readers pay attention and really ‘listen’ to what the characters say. Mr. Shen appears as an old man, but he is actually a thousand-year-old Eastern dragon who needs stubborn and sassy 11-year-old Timothy to do him a favour. Shen softly, yet strongly, asks Timothy to help him, and so the pair set off on a journey to China with the hope of having a curse lifted.

From a slow beginning, the pace catapults into a danger-fraught frenzy as Tim faces different enemies. Among them is Emily Bearclaw, an expertly-trained ninja, who has the trick of getting her message across … even when she is whispering in the ear of Headmaster Doosy from whom she wishes to extract information. Emily hails from Saskatchewan – one of the information bits that Kress’s chatty narrative voice includes to amuse readers. There is not much extra room for sensual description in a story that zooms around in taxi cabs, eighteen-wheelers, helicopters, and planes – the setting is ‘on the go.’ Even pirate ships turn up as Alex, the ten-and-a-half-year old girl from Kress’s first novel, Alex and the Ironic Gentleman, sails into Timothy’s life to help him prove that risk-taking and child power can save the day. Timothy also learns that despite mouthing “whatever” as his stock answer to questions, he does care about things – including Mr. Shen the dragon.

Timothy and the Dragon’s Gate

Stealthy ninjas, weird work-experience placements and a shipful of bloodthirsty pirates — 11-year-old Timothy finds himself on the adventure of a lifetime, meeting a host of strange and scary characters along the way, including Alex, captain of “The Ironic Gentleman.”

Dragon Books for Kids and Teens