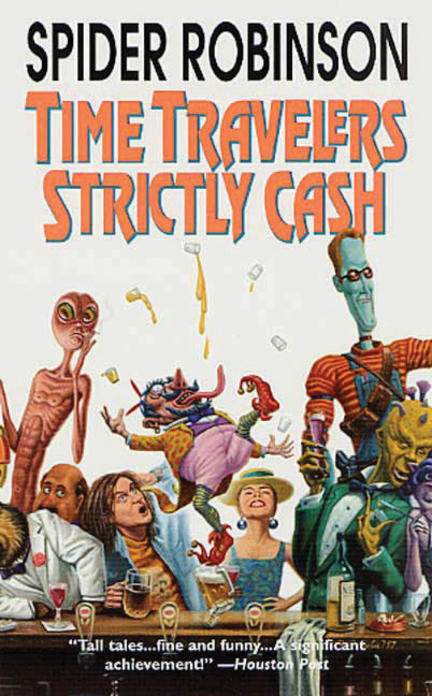 Human or otherwise, regardless of race, creed or dimension of origin, if you're looking for a good time in a place where the beer is always flowing, and the stories always out of this world, step up to the bar at Callahan's. There'll be tales - Oh, are there tales! Like the one about a loud-mouthed time traveler who capitalized on a rip in the space-time continuum; or the one about Ralph the talking, gin-drinking German Shepherd created by a demented genius shrink. But don't believe us. AskRalph. He'll tell you himself. Also don't forget to watch out for the deadly toasts - especially the Melba toast! And above all, remember... Time Travelers Strictly Cash.

Spider Robinson, winner of three Hugos and a Nebula, was born in the Bronx and raised on Long Island, and has been a Canadian resident for 30 years. Holder of a bachelor's degree in English from the State University of New York, he worked as a folksinger and journalist before publishing his first story in Analog in 1973. He now lives with his wife Jeanne Robinson (co-author of the Hugo- and Nebula-winning Stardance trilogy) on an island outside Vancouver, B.C., where they raise and exhibit hopes.

Eleven of his 31 books are set in Callahan's Place, a fabulous tavern founded by a time traveler, where puns flow as freely as beer, and smell far worse. The most recent is Callahan's Con [Tor July 2003]. He has contributed a regular editorial column, "Future Tense," to Canada's national newspaper, The Globe & Mail, since 1995. In 2000, he released Belaboring the Obvious , a CD of original music with the legendary Amos Garrett ("Midnight at the Oasis") on lead guitar, and in 2001 he was a celebrity judge at the Cannabis Cup in Amsterdam.

Other titles by Spider Robinson