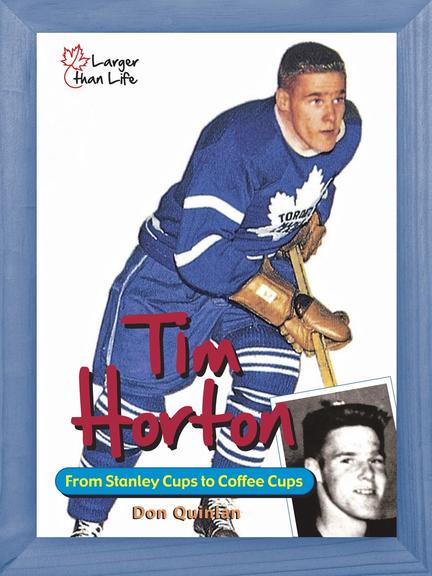 No Canadian can fail to recognize the name Tim Horton. For many, however, the name suggests coffee and donuts, especially "donuts with sprinkles". But Tim Horton was more than that. He was a tough but fair sportsman reknowned as the "strongest man in hockey". This junior biography presents his true story to young Canadian readers.

Don Quinlan is a retired history teacher from the Toronto District School Board. He has authored or co-authored over thirty books for students in secondary and elementary schools. He currently works on a series of projects for the CBC. Like so many Canadians, he admires the life of Tim Horton, enjoys visiting Tim Hortons, and is patiently awaiting the return of the Stanley Cup to Toronto.

"The fast pace of the description of famous hockey games is sure to be a draw to young readers, as are the stories of Tim's struggle against odds - such as his very surprising vision problems. . . the dogged hard work of Horton's life is presented with credibility, and the book is indispensable in any Canadian non-fiction collection.

One wonders how the world would have changed if Tim Horton [had] never been born? For one thing, we would not have Tim Horton coffee shops every half mile or so. Tim Horton was the consummate defenseman for the Toronto Maple Leafs, then the Buffalo Sabres. His tragic death cut short quite a hockey career and personal life.
Don Quinlan's book about the former star is more geared to a younger audience, so they can read about his career and accomplishments. It is a tribute to the man, before hockey, and during his career. He was well-liked by teammates and in the book we see the man behind the player.
Filled with classic photos of Horton the player and family man, the book will show younger readers how someone can achieve their dream, and even as a hockey star, could branch out into the donut business and leave behind such a legacy.
Tim Horton will always live on in name and spirit, and although geared to younger readers, any reader of any age will find new facts and information about this man who died much too soon.
RATING: 4 BOOKMARKS
-- Shelf Life August 2010

It's no small irony that hockey players and their fans routinely show up at rinks across Canada with their "Timmies" in hand.

The man behind the distinctive coffee was one of Canada's top hockey players. He was only 44 when he was killed in a car accident in 1974.

Yet we associate Tim Horton more with food and drink, than we do the game of hockey.

Toronto author Don Quinlan, a retired history teacher, offers readers ages eight to 12 a look at the man behind a tremendous hockey career and a monumental business franchise. Despite his apparent successes, Horton struggled as an underprivileged child and his coffee-and doughnut business really came about because hockey players in his era had to find extra income to get by during the off-seasons.

Easy to read and spilling with archival photos and interesting facts, this is an inspiring book about a man who started with nothing, went on to do great things, but left us all too soon.
-Brenda Hoerle of the Waterloo Region Record

"This is an engaging biography of an athlete who is likely to be remembered for reasons other than his sporting achievements, but who still fascinates the public to this day. This book is an essential purchase for Junior and Middle school libraries who serve a large population of hockey fans; it is a volume that will be read and discussed by many readers."
-- Resource Links

Other titles by Don Quinlan

A Life in Motion

A History of Our Country from 1900 to The Present

Growth of a Nation