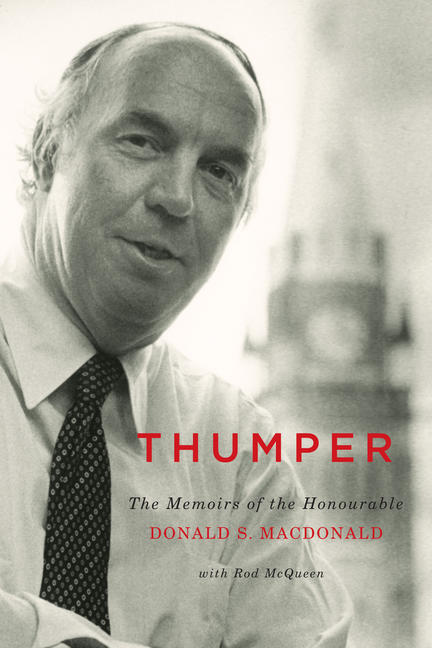 "At a certain point in our lives we are left only with our close relationships and our clear recollections." So begins Thumper: The Memoirs of the Honourable Donald S. Macdonald.

An early supporter of Pierre Trudeau for the Liberal Party leadership, Donald Macdonald has had a career in public life spanning four decades that included posts as House leader, minister of national defence, minister of energy, and minister of finance. He chaired the landmark Royal Commission on the Economic Union and Development Prospects for Canada, which led to free trade between Canada and the United States, and as High Commissioner to the United Kingdom he conferred with Margaret Thatcher and dined with Queen Elizabeth II.

Drawing on extensive archival resources and contemporaneous personal diaries, Macdonald insightfully details his friendship with Trudeau, fascinating encounters with world leaders, and personal revelations about the October Crisis. In this behind-the-scenes account of the business of governing, he also describes high-stakes disputes with Alberta over soaring energy prices, the real story behind the resignation of John Turner as finance minister, and the decisive action taken against inflation using wage and price controls.

Interlaced with anecdotes that reveal Macdonald's self-effacing good-nature, Thumper is a riveting memoir written with humility and candour, recalling an exceptional period in Canadian politics.

The Hon. Donald S. Macdonald (1932-2018) was a former cabinet minister, Royal Commissioner, and High Commissioner.Rod McQueen is the author of more than a dozen books including the National Business Book Award-winning Who Killed Confederation Life? and The Eatons: The Rise and Fall of Canada’s Royal Family, winner of the Canadian Authors Association prize in history.

ROD MCQUEEN has been a journalist for more than thirty years and has lived and worked professionally in London,Washington, D.C., and Toronto. During that time he has written for numerous magazines and newspapers, and has also done broadcast work. He is the author of eleven books, including Who Killed Confederation Life?, winner of the National Business Book Award, and the bestseller, The Eatons:The Rise and Fall of Canada's Royal Family, winner of the Canadian Authors Association Award in history. The Icarus Factor, the unauthorized biography of Edgar Bronfman Jr., was published in 2004. He lives with his wife in Toronto.

Other titles by Rod McQueen

A History of Canadian Imperial Bank of Commerce

The Duke of Kent

The Memoirs of Darcy McKeough

How Frank Hasenfratz Grew Linamar from Guelph to Global

The Inside Story of Research In Motion

How Domenic D'alessandro Built A Global Giant And Fought To Save

Leaving Home and Loving it