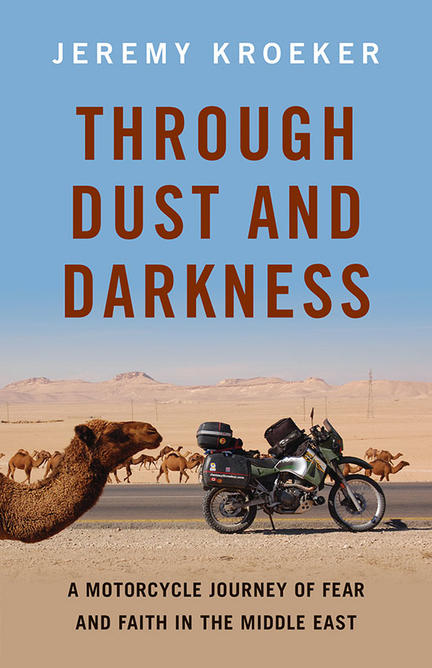 Jeremy Kroeker is a Mennonite with a motorcycle. When his seemingly unflinching faith in a Christian worldview begins to shift, Kroeker hops on his bike to seek answers from another perspective. After shipping his ride to Europe, Kroeker discovers that the machine wobbles back and forth worse than his own opinions about spirituality. Still, he caries on, oscillating through Europe—Germany, Austria, Croatia, Albania—and into the Middle East - Turkey, Syria, Lebanon and, ultimately, Iran.

It is there, in the theocratic nation of Iran, that Kroeker finds himself on a forbidden visit to a holy Muslim Shrine. Once inside, invisible hands reach into his chest and rip from his heart a sincere prayer, his first in many years. And God hears that prayer. For before Kroeker can escape Iran, God steals into his hotel room one night to threaten him with death. At least, that's one way to look at it.

In the end, Kroeker comes to accept uncertainty. What does he really know anyway? He may always fear a God that he can't explain. Perhaps if he keeps riding, one of these days God will speak clearly. And that frightens him, too.

Jeremy Kroeker is a freelance writer, a speaker, mountaineer and the award-winning author of Motorcycle Therapy – A Canadian Adventure in Central America. With his motorcycle, he has travelled to over 30 countries while managing to do at least one outrageously stupid thing in every one. He has evaded police in Egypt, tasted teargas in Israel, scrambled through minefields in Bosnia and Lebanon and wrangled a venomous snake in Austria. One time he got a sliver in El Salvador. His writing has appeared in newspapers such as the Toronto Star, Winnipeg Free Press and Calgary Herald, and in U.S. magazines such as Alpinist, and Outrider Journal. He was born in Manitoba, grew up in Saskatchewan and currently lives in Canmore, Alberta.

It’s rare that I begin reading a book with such trepidation, but become so rapidly hooked.... This is writing that sucks you in, and which will definitely mean you sit up late into the night. It contains subject matter that may challenge your own prejudice, but isn’t that what travel is for? And this is perhaps the best vicarious trip you’ll take to the Middle East.—Paddy Tyson, Overland Magazine

Kroeker absolutely nails the Middle East, and if you want to know what the region is like beyond the violent and sensational headlines, read this at once.—Michael J. Totten, prize-winning author of The Road to Fatima Gate

Kroeker provides plenty of from-the-gut laughs without ever giving the impression that he doesn’t take his surroundings or subject matter seriously. This is an impressive and necessary feat when juggling such a volatile combination, and he handles it with aplomb. The accompanying photographs are what one would expect from a man out to commemorate a personal trip rather than to professionally document the scenes he encountered.... Pragmatic yet still beautiful and hopeful.—Kirkus Reviews

Other titles by Jeremy Kroeker

Tales from the Road by Writers who Ride

Tales from the Road by Writers who Ride

A Canadian Adventure in Central America