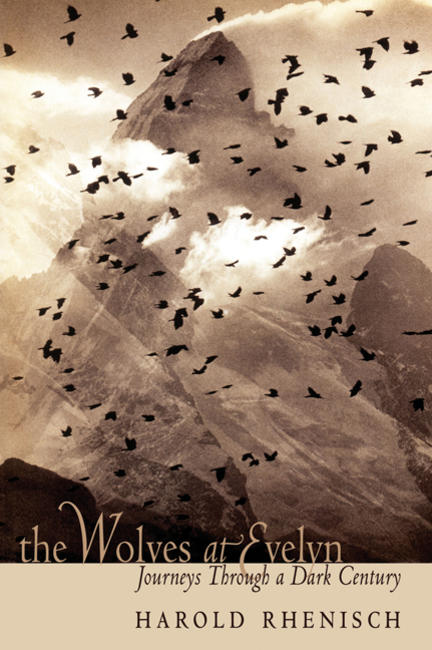 At once a memoir, a work of philosophy, a story of European immigration to Canada's dark places of the earth, and an exploration of the roots and effects of colonialism, The Wolves At Evelyn: Journeys Through a Dark Century is a stylistic and rhetorical tour de force from one of Canada's master prose stylists.

Dissident communists fleeing 1920s Germany, Harold Rhenisch's grandparents imagined that British Columbia's Interior was the end of the earth—a new world where they could fulfil their dreams of the land, freed from tyrrany and from history itself. A generation later, in the wake of World War II, his father arrived, carrying many of the same ideas with him. What they found instead was a colonial culture as highly developed as Doris Lessing's Rhodesia.

Rhenisch grew up at the nexus of these cultures: a Germany where Nazism simultaneously did and did not happen, a Canada in the process of shedding British colonialism for American, and a land—the Interior—that had no point of contact with any of them.

With remarkable range and vision, Rhenisch turns in a bravura performance, sifting through the ashes of personal experience, family anecdotes, literature, art, history, and the land itself for clues to a great untold story, Rhenisch assembles a collage of images and ideas that becomes a whole much greater than the sum of its parts. The hidden history of a forgotten outpost of the Empire is laid open, shattering dearly held myths and exposing buried skeletons.

How was the sunny, carefree Okanagan Valley fruit culture built on the back of King Leopold's Congolese slave trade? How does Margaret Atwood's garrison theory of literature reflect on Rhenisch family's hidden Nazi past? How did the Hudson's Bay Company Blanket act as both a cherished kitsch object for generations of Canadians and a tool of genocide? Alternating between light and darkness, great humour and sharp indignation, this is a disturbing, thought-provoking and important work from a masterful writer and cultural analyst.

Harold Rhenisch is an award-winning poet, critic, and cultural commentator. His awards include the Confederation Poetry Prize in 1991 and the BC &: Yukon Community Newspapers Association Award for Best Arts and Culture Writing in 1996. He is a seven-time runner-up for the CBC/Tilden/Saturday Night Literary Contest. In 2005, he won the ARC Magazine Critics Desk Award for best long poetry review and the Malahat Review Long Poem Prize for "Abandon." He won this prize again in 2007 for "The Bone Yard." His non-fiction book Tom Thomson's Shack was short-listed for two BC Book Prizes in 2000. For its sequel, The Wolves at Evelyn, he won the 2007 George Ryga Award for Social Responsibility in Literature.  Harold Rhenisch has recently moved from 150 Mile House in BC’s Cariboo region to Campbell River on Vancouver Island.

Rhenisch proves that the unique adaptation of a magic-realist style to non-fiction, combined with an episodic structure that would be quicksand to most writers, wasn’t just a brilliant fluke . . . but a technique he has mastered completely. —Vancouver Sun

Other titles by Harold Rhenisch

The Art of Haying

A Journey to Iceland

A Room in the City

An Anthology of Contemporary BC Poetry

In This Poem I Am

A Palette of Birds