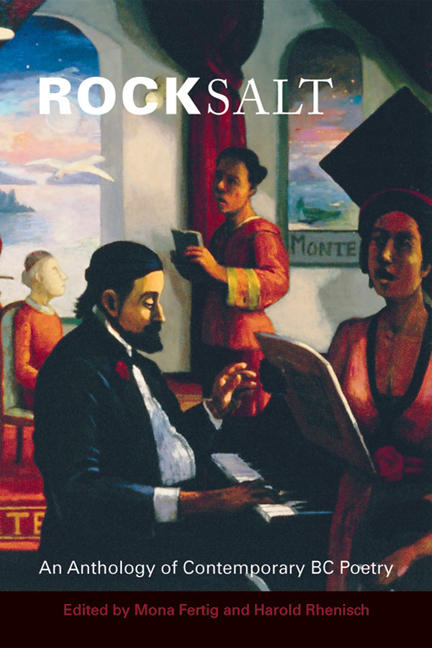 Rocksalt, An Anthology of Contemporary BC Poetry, features new and previously unpublished poetry and poetics from 108 BC poets. Dynamic and groundbreaking, this first anthology of BC poetry in over 31 years, features an eclectic mix of new, mid-career and established BC poets writing in a rich variety of styles, from Nelson to Masset, Prince George to Vancouver.

Mona Fertig's father, George Fertig (1915-1983), was one of the unheralded artists of BC and she grew up acutely aware of the politics of art. The Life and Art of George Fertig took her 15 years to research and write. This led her to publish the UABC series, written by authors; Adrienne Brown, Peter Busby, Claudia Cornwall, Christina Johnson-Dean, Eve Lazarus, Kerry Mason, Wendy-Newbold Patterson, Sheryl Salloum and Monika Ullmann. Fertig was made a Vancouver Literary Landmark in 2017. There was a retrospective of George Fertig's work at the Burnaby Art Gallery in 2010.

Harold Rhenisch is an award-winning poet, critic, and cultural commentator. His awards include the Confederation Poetry Prize in 1991 and the BC &: Yukon Community Newspapers Association Award for Best Arts and Culture Writing in 1996. He is a seven-time runner-up for the CBC/Tilden/Saturday Night Literary Contest. In 2005, he won the ARC Magazine Critics Desk Award for best long poetry review and the Malahat Review Long Poem Prize for "Abandon." He won this prize again in 2007 for "The Bone Yard." His non-fiction book Tom Thomson's Shack was short-listed for two BC Book Prizes in 2000. For its sequel, The Wolves at Evelyn, he won the 2007 George Ryga Award for Social Responsibility in Literature.  Harold Rhenisch has recently moved from 150 Mile House in BC’s Cariboo region to Campbell River on Vancouver Island.

Other titles by Mona Fertig

A Pocket Guide to The Unheralded Artists of BC Series

Love of the Salish Sea Islands

A bright collection of creative non-fiction

The Life and Art of George Fertig

Other titles by Harold Rhenisch

The Art of Haying

A Journey to Iceland

A Room in the City

In This Poem I Am

The Wolves at Evelyn

Journeys through a Dark Century

A Palette of Birds