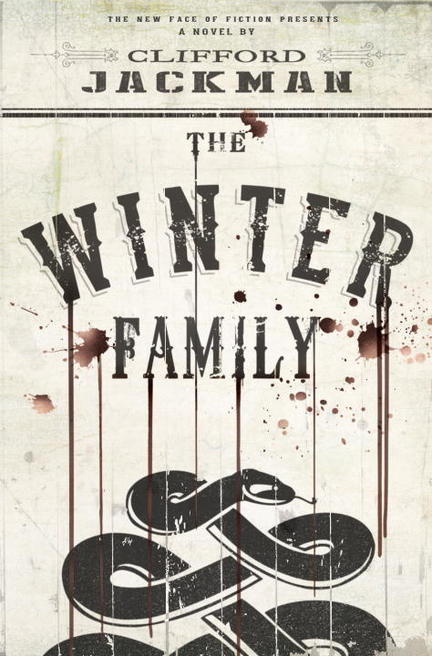 Tracing a gang of ruthless outlaws from its birth during the American Civil War to a final bloody showdown in the Territory of Oklahoma, The Winter Family is a hyperkinetic Western noir and a full-on assault to the senses.
From the 1860s to the 1880s, the outlaws known as the Winter Family roam the harsh frontier, both serving and battling the fierce advance of civilization. Among its twisted specimens are the psychopathic killer Quentin Ross, the mean and moronic Empire brothers, the impassive ex-slave Fred Johnson, and the gunslinging child prodigy, Lukas Riddle. At the centre of this ultraviolent storm is their cold, dandified and golden-eyed leader, Augustus Winter--a man with a pathological resistance to the rules of society and a preternatural gift for butchery.
From their political thuggery during a Chicago election to their work as bounty hunters in the deserts of Arizona, Winter and his crew follow a grim, borderland morality that plays out, time and again, in ruthless carnage.
With its haunting, hard-edged style, The Winter Family is a feverishly paced meditation on human nature, violence and the deep contradictions of progress.

CLIFFORD JACKMAN was born in Deep River and raised in Ottawa. He received a BA from York University, an MA from Queen's University and an LLB from Osgoode Hall Law School. He practises law in Richmond Hill, Ontario, and counts Stephen King and Cormac McCarthy among his strongest literary influences.

Excerpt: The Winter Family: A Novel (by (author) Clifford Jackman)

High summer night in Oklahoma. Warm winds that smelled of apple blossoms. Now and then a lightning bug winked on and drifted through the air. Quentin Ross caught one in his fist and held it there, with its radiance leaking between his fingers and reflecting in his shallow eyes. For a moment he rolled the lightning bug between his thumb and forefinger, and then he crushed it, smearing himself with its luminescence, and he smiled, wide and empty.

The Winter Family was camped in a stand of blackjack oaks. There was no fire but the moon was up, pushing the stars back into the darkness of the sky. Charlie and Johnny Empire lay on their sides, playing cards and bickering. Fred Johnson wrote in his little book and drank whiskey from a cup not much bigger than a thimble. Quentin wandered from tree to tree, humming to himself, soft and tuneless. The others tried to sleep, tucked between tree roots or curled in bedrolls like pill bugs. All of them, except for Augustus Winter.

He sat astride a pale horse, like Death, leaning back in his heavy saddle and smoking a cigarette in an ivory holder. The suit he wore was well tailored but growing threadbare. His straw-white
hair was cropped short and he had an extravagantly waxed mustache. His eyes were very light amber, almost yellow, the eyes of an eagle or a cat. Occasionally he would remove a watch from his pocket and turn it in the pale moonlight, watching as the second hand marched around, and around, and around. It is often observed that murderers do not look like murderers. No one said that of Augustus Winter.

A little after midnight Winter cocked his head. “They’re coming.”

“I don’t hear anything,” Quentin said.

But soon they all did. The sleepers were kicked into wakefulness, the lantern shuttered, weapons drawn, instructions whispered.

O’Shea and two of his hands came around the bend and rode up to the camp. Everyone relaxed. O’Shea pulled up his horse, unstrapped a bag tied to his saddle, and tossed it to Quentin.

“I’d be grateful if you count it now,” O’Shea said.

Quentin knelt down, opened the sack, and rifled through the bills quickly. Then he stood, his knees creaking.

“Good,” O’Shea said and began to wheel his horse around.

“Please, just a moment more.” Quentin’s voice was very deep, melodious. He spoke slowly, as if he were thinking very carefully, or reciting poetry.

O’Shea turned back to him, reluctantly. Both men were around fifty, but O’Shea was a tall man with a healthy mane of gray hair, while Quentin was small and fine boned.

Quentin continued as if O’Shea had not spoken.

“. . . which were not included in the initial estimate of our—”

“Estimate?” O’Shea shouted. “We had a deal, you thieves.”

“Yeah,” Winter said. He did not speak loudly but all the men fell silent, and the bugs too, and the wind seemed to die down to nothing.

O’Shea looked at Winter and bore his gaze. That was something not every man could do. O’Shea was not like every man. Willpower radiated from him. And he was angry now. He looked at the dirty mob of killers under the trees, white trash and blacks and Mexicans, in their muddy boots and sweat-stiff dusters, thin and poor and dumb as nails. One of them was using baler twine as a rifle strap. He thought: Am I to let these men get the better of me? But then, it was only money.

“How much?” O’Shea asked. Quentin told him. O’Shea nodded and said, “The money will be ready when you get back. I trust that is all.” Not a question.

But Quentin said, “Just one more thing, Mister O’Shea! Please! One more thing. A member of our band has taken ill. He needs a doctor. We would be grateful if you could bring him back to town.”

“Oh for heaven’s sake,” O’Shea snapped, but they were already bringing the sick man forward, surprisingly small, wrapped up tightly in a stinking bedroll. O’Shea stood up in his stirrups and looked down. He frowned. The man was an Indian, but his skin had gone gray and seemed thin, as if his bones were likely to poke through at any moment. Greasy foam flecked around his lips and nose and the whites of his eyes were jaundiced, the color of egg yolk.

“One of you take him,” O’Shea said to his hands.

The Winter Family laughed as the hands threw Bill Bread over the neck of one of their sturdy ponies and rode off, holding their noses. They all laughed, except for Augustus Winter, who watched O’Shea’s horse in the dim moonlight, until it was lost in the trees.

LONGLISTED 2015 – Scotiabank Giller Prize
“Brutal. Nihilistic. Extreme. Clifford Jackman’s debut, The Winter Family, lit my synapses up like a pinball machine. I joined golden-eyed Augustus Winter and his band of merry sociopaths on their journey through the dying West, civilization squeezing in from every angle–this is a raw, blood-splattered picaresque that I enjoyed immensely. Jackman throws nine kinds of hell at you in this book, unloading with both barrels, and never lets up the intensity.” —Craig Davidson, author of Cataract City

“Clifford Jackman’s novel somehow manages to be both traditional and eerily unique. Think of it as a combination of High Noon and The Shining.” —Jeff Guinn, New York Times bestselling author of Glorious and The Last Gunfight

“Clifford Jackman uses the adventures of a gleefully nihilistic group of outlaws to tell the story of ‘civilization’s’ implacable march westward. The members of the Winter Family are the advance guard–the thugs who more refined and powerful men send out to batter the world into submission. They burn Georgia for Sherman; they fix an election in Chicago for the young Republican Party; they clear Oklahoma of inconvenient natives for rapacious land barons. If Sam Peckinpah had been a novelist rather than a filmmaker, this is the book he would’ve written: brutal, at times darkly funny, and utterly gripping from the first page to the last.” —Scott Smith, New York Times bestselling author of A Simple Plan and The Ruins
“[M]enacing and cinematic.” —CBC
“This is a high-octane novel that you would expect from Sam Peckinpah or Quentin Tarantino, blood-drenched but allegorical. It is a rampage around the American west through the eyes of a Canadian, which makes this one very special.” —Andrew Armitage, The Sun Times (Owen Sound)
“The Winter Family is a philosophical spaghetti western that doesn’t stint on the tomato sauce, served up with flair.” —Quill & Quire (starred review)
“Violent, thrilling and beautiful.” —Greg Hudson, Sharp Magazine
“Jackman’s novel is a blood-soaked historical western covering over three decades of mayhem, from the Civil War to 1900 Los Angeles. . . . The strength of the story is Jackman’s vivid portrayal of men who choose violence and lawlessness as their way of life, and the justifications they create to rationalize their immoral behavior. This is a chilling tale.” —Publishers Weekly
“From the opening page, a vortex of violence rages through the book, leading from Sherman’s March to the Sea to Chicago, Arizona and Oklahoma. . . . Bloodletting as philosophical exercise, and not for the faint of heart.”  —Kirkus Reviews
“Jackman writes well, with great atmosphere, though the cruelty of his characters is so relentless and one dimensional that it borders on banality, and maybe that’s the point. The hard realism and violence, combined with the evocative prose, will intrigue readers of Cormac McCarthy and James Lee Burke.” —Booklist
“This noir Western is a violent rampage through the American West. Canadian author Jackman . . . is a deft hand when describing the world, both physical and social, that the gang moves through. . . . [F]ans of Cormac McCarthy’s Blood Meridian and James Carlos Blake’s In the Rogue Blood will appreciate this latest entry in the gritty Western genre.” —Library Journal
“[E]xpansive. . . . Jackman builds a great deal of sympathy for the human race, at once ignoble and sublime. . . . If you are a fan of Cormac McCarthy and the new era of Western novel, you will enjoy The Winter Family.” —Melony Carey, Muskogee Phoenix

“To call this novel a dark and gritty Western would be a tremendous understatement. . . . I admire Jackman’s storytelling.” —Historical Novel Society

Other titles by Clifford Jackman

The books that played a role in inspiring The Conjoined.

The author of new novel The Winter Family with a list of novels that take us back—often to the Old West and a wild frontier.