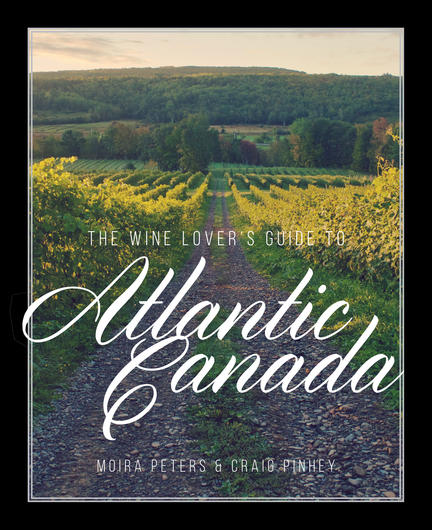 Whether it's racking up international awards or attracting tourists to the east coast in droves, the world has taken notice of Atlantic Canada's wine. The Wine Lover's Guide to Atlantic Canada is the definitive guide to region, through the blueberry-wine empire of Newfoundland and Labrador, to the isolated terroir of Prince Edward Island, the lush river vineyards of New Brunswick, and the rich coastal and valley wines of Nova Scotia.

In engaging, accessible text, sommelier-journalists Moira Peters and Craig Pinhey explore the history, climate, and industry of wine-making distinct to each Atlantic province, showcasing the various grape varietals, styles, and influences of this eclectic wine region. Features profiles of over thirty Atlantic wineries, sidebars, terroir maps, and is accented with over 75 stunning images from sommelier-photographer Jessica Emin.

Moira Peters grew up in Margaree, Nova Scotia. She cut her teeth on the New York wine industry, receiving Captain Sommelier certification on Long Island from the Sommelier Society of America in 2007. Upon moving back to Nova Scotia, she started Unwined, a wine workshop and tasting party business. She began writing with grassroots news network The Media Co-op, and now writes Glass Act, a weekend wine column with The Chronicle Herald. She currently lives, writes, and tends chickens in Maitland, Nova Scotia.

Craig Pinhey graduated as a Certified Sommelier in Halifax in 2000 from the Canadian (now International) Sommelier Guild program, and is a member of the Canadian Association of Professional Sommeliers. Craig has been judging national Canadian wine competitions for over fifteen years. An Engineer by education, Craig worked twelve years in the Ontario steel industry before moving back east to start a writing career. Today he is a food and beverage columnist for the New Brunswick Telegraph Journal and a regular columnist for TAPS Beer Magazine, Progress and East Coast Living magazine. Craig lives in Rothesay, New Brunswick, with his wife and daughter, and travels regularly in the region and around the world, hunting for great food, drink, and stories.

Moira Pinhey and Craig Peters knew exactly the digestible details to include so as to capture the attention of fellow wine enthusiasts.