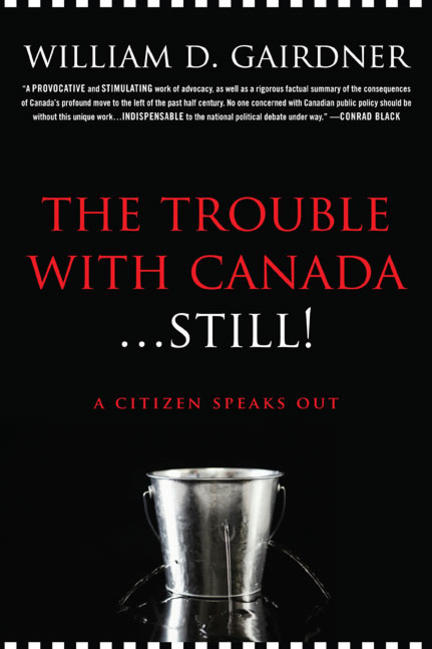 Canada suffered a regime-change in the last quarter of the twentieth-century, and is now caught between two irreconcilable styles of government: A top-down collectivism and a bottom-up individualism. In this completely revised update of his best-selling classic, william gairdner shows how canada has been damaged through a dangerous love affair with the former. Familiar topics are put under a searing new light, and recent issues such as immigration, diversity, and corruption of the law are confronted head on as gairdner comes to many startling—and sure to be controversial—conclusions. This book is a bold clarion call to arms for canada to examine and renew itself—before it is too late.

William Gairdner is a best-selling author, university professor, businessman, philanthropist, independent scholar and former track and field athlete. His most recent books include The Book of Absolutes: A Critique of Relativism and a Defence of Universals, Constitutional Crack-Up: Canada and the Coming Showdown With Quebec, The Trouble With Democracy and The War Against the Family: A Parent Speaks Out. From 1994-2000 he was Chairman, The Gairdner Foundation. Founded in 1957 by businessman and philanthropist James A. Gairdner, the foundation gives annual international awards to research scientists who have made discoveries in medical science that lead to the relief of human suffering. As of 1999, fully 254 scientists had won this award, 54 of whom subsequently won the Nobel Prize for Medicine. In 1997 he became founder and president of Civitas, a national organization of 150 prominent academics, journalists, authors, and interested citizens. Civitas was founded to promote and deepen understanding of the problems of freedom and order in modern society. In his career as an athlete, he won a silver medal in the decathlon in the 1963 Pan American Games in Brazil and placed eleventh in the decathlon in the Olympic Games in Tokyo in 1964.

“This is a provocative and stimulating work of advocacy, as well as a rigorous factual summary of the consequences of Canada's profound move to the left of the past half century, and no one concerned with Canadian public policy should be without this unique, now almost institutional, work. Even those who disagree with aspects of it will find its assemblage of little-publicized facts and array of options and prospects indispensable to the national political debate under way.” Conrad Black

“...revisits the statist, politically correct, over-regulated albatross that has being weighing on Canada's spirit. Throw it off! Gairdner shows you how. This is an eloquent plea for liberty and independence by a keen-eyed critic who combines singing prose with a gimlet eye. Read this book! You—ll want to require every politician in Ottawa to pass a test on it before assuming office.” -Roger Kimball, editor, The New Criterion (Foundation for Cultural Review, New York)

“The Trouble with Canada opened my eyes to the decline of liberty in Canada. Now, Gairdner speaks to a new generation with a thoroughly updated version of that classic book. The struggle for freedom is never over.?-Tom Flanagan, professor of political science at the University of Calgary and former Conservative Party campaign manager

Other titles by William Gairdner