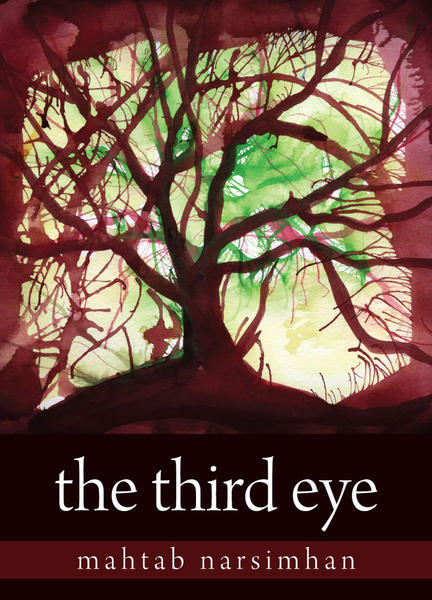 For Tara and her brother, Suraj, the year their mother and grandfather fled the village of Morni in the middle of the night has been a nightmare. Their new stepmother is cruel and deceptive, and the village itself is lacking a healer. What's more, men of the village have been disappearing, often returning in a strange, altered form.

When a new healer, Zarku, a mysterious man with a third eye possessing strange power, suddenly appears in Morni, all are mesmerized by his magic -- all except Tara, who sees through his evil disguise.

With nothing but her own courage and wit, Tara tries to find her missing mother and grandfather, the true healer, in time to save her village. But along the way she must enlist the help of the god Ganesh and the lord of death, Yama, or she, like others before her, will fall victim to Zarku's third eye.

Mahtab Narsimhan is the author of several critically acclaimed books, including Silver Birch Award winner The Third Eye. Her novel, The Tiffin (Dancing Cat Books, 2011), was nominated for numerous awards in Canada and was recently published in the United Kingdom and Taiwan. Mission Mumbai is her publishing debut in the United States. Mahtab is a native of Mumbai, India, and lives in Toronto, Canada. Visit her online at www.mahtabnarsimhan.com.

Strange things have been going on in the village of Morni where Tara and her brother live. Men from the village have been disappearing, and returning in a strange and altered form. When a new healer Zarku appears — with a third eye possessing a frightening power — only Tara can see through his evil disguise. With nothing but courage and wit, Tara will set out to find her missing mother and grandfather, and try to save her village. But if she fails, she’ll fall victim to Zarku’s third eye and meet a terrifying fate.

In her first novel, author Mahtab Narsimhan combines elements of classic fairy tales, such as “Hansel and Gretel,” with Indian mythology for a highly original and entertaining fantasy adventure. The story begins on a strong note, creating an eerie and tension-filled atmosphere that immediately raises questions with the readers, and foreshadows what is to come.

The author also touches on important themes in the story, including courage, self-reliance, loyalty, ingenuity and perseverance. From the moment Tara and her brother run away from their malevolent stepmother, she begins to discover these traits in herself. After making a deal with Yama, the Hindu lord of death, to save the life of a friend, she realizes that she alone can decide which way her moral compass is pointing and that the fate of many rests on her courage.

Overall, the book moves along at a swift pace, but the dialogue occasionally feels forced, and some passages clunky and awkward. Though the age of the characters are never specifically mentioned, the book reads much younger than the apparent target audience of teens.

Despite this difficulty, readers will enjoy the lushly described Indian setting as well as the cultural references to Hindu gods and celebrations, making this a solid middle grade read suitable for literature circles or book club discussions.

When a new healer, Zarku, suddenly appears in the village of Morni, everyone is mesmerized by his magic — except Tara and her brother, Suraj, who see through his evil disguise. Can Tara save her village from Zarku?

Other titles by Mahtab Narsimhan

Valley of the Rats

Valley of the Rats

A Novel of Sacred Cows, Snakes, and Stolen Toilets

You and Me Both

A Novel of Sacred Cows, Snakes, and Stolen Toilets

The Third Eye / The Silver Anklet / The Deadly Conch