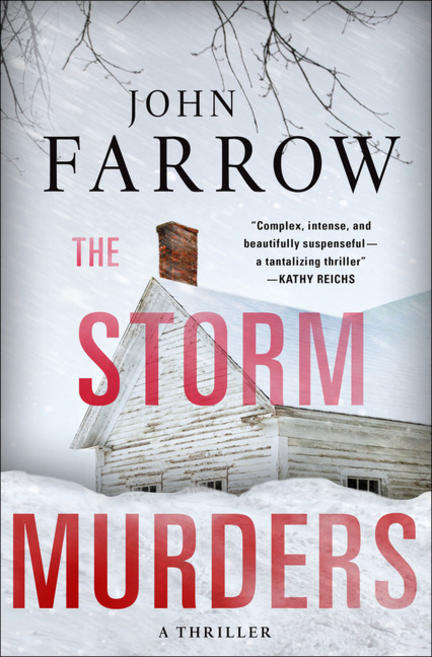 City of Ice, John Farrow's first book in his acclaimed Emile Cinq-Mars series, which has been hailed byBooklist as "one of the best series in crime fiction," has been published in over 17 countries. Now withThe Storm Murders, the series continues.

On the day after a massive blizzard, two policemen are called to an isolated farm house sitting all by itself in the middle of a pristine snow-blanketed field. Inside the lonely abode are two dead people. But there are no tracks in the snow leading either to the house or away. What happened here? Is this a murder/suicide case? Or will it turn into something much more sinister?

John Farrow is the pen name of Trevor Ferguson, a Canadian writer who has been named Canada's best novelist in both Books in Canada and the Toronto Star. This is the first of a trilogy he is writing for us called The Storm Murders trilogy. Each book features Emile Cinq-Mars, the Hercule Poirot of Canada, and extreme weather conditions.

JOHN FARROW is the pen name of Trevor Ferguson, who has written nine novels and four plays and has been named Canada’s best novelist in both Books in Canada and the Toronto Star. Under the name John Farrow, he has written two other novels featuring Émile Cinq-Mars, City of Ice and Ice Lake. He was raised in Montreal and lives in Hudson, Quebec.

“One of the best mysteries from Canada in some time, this fourth book in a strong series is equally good at capturing the atmosphere of New Orleans and the distinctive qualities of Montreal.” —Kirkus Reviews (starred)

“Farrow has written an excellent thriller in which characters, plot, and setting score a triple for suspense.” —Library Journal (starred)

“With thought-provoking passages ... threaded throughoutThe Storm Murders,one might be forgiven for struggling to recall what life was like before this particular detective entered one's mind. For this reader, Cinq-Mars is there to stay.” —Criminal Elements

“Farrow brings a literary fiction writer's sensitivity to nuance and feel for landscape to this fine, character-rich thriller with a bang-up finish. Add Cinq-Mars to your shortlist of favorite retired Montreal detectives, including, of course, Penny's Armand Gamache.” —Booklist

“This terrific story, with sympathetic characters and Farrow's crisp prose, is some of the best fiction to come out of Canada. Louise Penny won't be bumped off the podium, but she'll have to clear some space next to her.” —Bookpage

“John Farrow has given crime-fiction fans something they haven't had for a long time: a well-conceived, well-written locked-room puzzle mystery combined with an engaging thriller that deftly explores the depths of human evil...Farrow is a skilled writer, and in THE STORM MURDERS he has brought his formidable talents to bear in creating an atmospheric, intense and sometimes graphic story that draws on recent history for it's narrative power.” —Reviewing The Evidence

Other titles by John Farrow