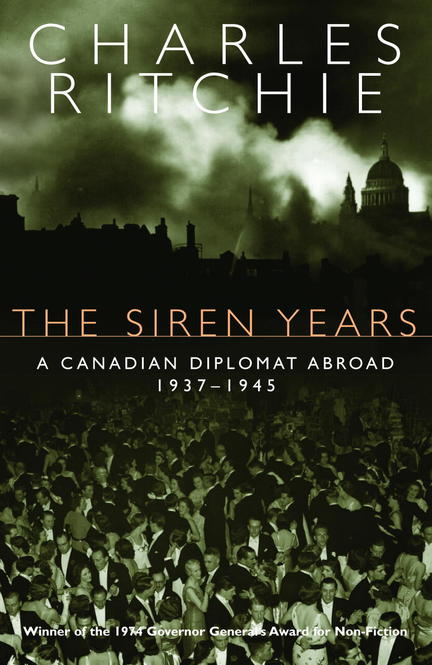 Charles Ritchie, one of Canada’s most distinguished diplomats, was a born diarist, a man whose daily record of his life is so well written that it leaps from the page.

In wartime England, Ritchie, as Second Secretary at the Canadian High Commission, served as private secretary to Vincent Massey, whose second-in-command was Lester B. Pearson, future prime minister of Canada. In a perfect position to observe both statecraft and the London social whirl that continued even during the war, Ritchie provides a fascinating, perceptive, and (surprisingly) humorous picture of the London Blitz – the people in the parks, the shabby streets, the heightened love affairs – and the vagaries of the British at war. There are also glimpses of the great, and portraits of noted artists and writers that he knew well.

A vivid document of a period and a wonderful piece of writing, The Siren Years has become a classic.

Charles Ritchie is a Fitzhenry and Whiteside author.

“Open these volumes anywhere and you will be rewarded with a razor-sharp profile of an individual, an original insight into the world affairs of the moment, a description of a room or a landscape startling in its visual sensuality, and at least one or two sentences that will make you laugh aloud.”
–Jane Urquhart, Brick magazine

“For anyone allured by diaries, here is a brilliant discovery. Charles Ritchie is a natural-born diarist.”
–C. P. Snow

“One of the great diarists of our time.”
–Globe and Mail

Other titles by Charles Ritchie

An Appetite for Life