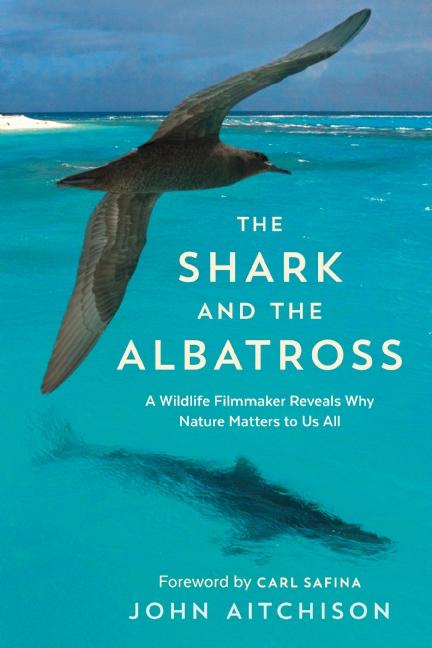 “A must for all those who enjoy insights into the natural world.” –Alexander McCall Smith

The daring and thoughtfully-rendered adventures of a filmmaker who travels to the ends of the earth to document animal lives.

For twenty years John Aitchison has been traveling the world to film wildlife for a variety of international TV shows, taking him to far-away places on every continent. The Shark and the Albatross tells the story of these journeys of discovery, and Aitchison’s encounters with animals in faraway and sometimes dangerous places. His destinations range from the remotest parts of Alaska and the Antarctic to India and China. Everywhere he goes, he describes—and photographs, in stunning colour—the triumphs and disasters in the lives of such animals, such as polar bears and penguins, seals and whales, sharks and birds, and wolves and lynxes, including their struggle to survive in a perilous world. And, as the author shows in several incidents that combine nail-biting tension with hair-raising hilarity, disaster can strike for filmmakers too.

John Aitchison is a wildlife filmmaker who has worked with National Geographic, PBS, the Discovery Channel, and the BBC on series including Frozen Planet, Life, Big Cat Diary, Springwatch, and Yellowstone. His many awards include a joint Primetime Creative Emmy and a joint BAFTA, both for the cinematography of Frozen Planet.

Ecologist and author Carl Safina explores how humans are changing the living world, and what those changes mean for wild places and for human and other beings. His work connects broad scientific understanding with a moral call to action. His writing has won the MacArthur “genius” prize; Pew and Guggenheim Fellowships; book awards from Lannan, Orion, and the National Academies; and the John Burroughs, James Beard, and George Rabb medals. Safina hosted the 10-part PBS series, Saving the Ocean With Carl Safina. He holds the Endowed Chair for Nature and Humanity at Stony Brook University and is founder of the not-for-profit Safina Center. He lives on Long Island, New York with his wife Patricia and their dogs and feathered friends. Carl’s most recent book is Becoming Wild: How Animal Cultures Raise Families, Create Beauty, and Achieve Peace.

"This book is in many ways a love song to the places (Aitchison) has spent time in and the animals he has observed ...He's is aware of the carbon footprint his work engenders and hopes his films do more good than harm, moving people to "choose to be on nature's side". In the end he simply loves his craft, and his enthusiasm sings off the page." —The Independent

"Most of us will not have the opportunity to visit many of these isolated locales or to see Adélie penguins, leopard seals or polar bears in their natural habitats, but John’s wonderful book provides the next best thing. " —Joseph T. Eastman, Professor Emeritus of Anatomy, Ohio University

"Through words and photos, Aitchison transports readers to far-flung corners of the earth and displays, vividly, why we should care about our natural world." —Paul Nicklen

"A thoughtful and moving book about wildlife and wild places from someone who’s spent decades observing both behind the lens." —Dr. Edwin Scholes, Cornell Lab of Ornithology

"His prose is clear and poetic as he describes running with wolf packs in Yellowstone National Park, witnessing a whale feeding frenzy in Alaska's northern sea, and encountering endangered tigers in India's dense forests, among other adventures around the globe." — Publishers Weekly

"Aitchison's great hope is that the rest of us, looking at his images, reading his tales, will love these animals as he does. That we will be moved. I was. You will be." — Virginia Morell, Author of Animal Wise: How We Know Animals Think and Feel

"John Aitchison’s considerable talents as a wildlife filmmaker may only be surpassed by his amazing ability to observe nature and write about it." —Tim Laman, National Geographic photographer

Other titles by Carl Safina