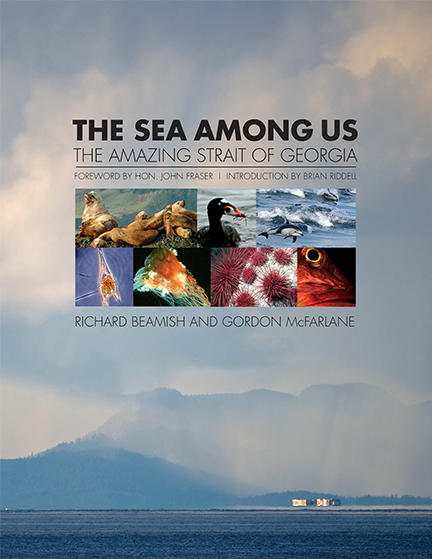 The Strait of Georgia is a one of the world's great inland seas, a 6,900 sq km body of water lying between the British Columbia mainland and Vancouver Island. Rich in history, teeming with wildlife and marine traffic, it is essential to British Columbians for food, jobs, travel and recreation. The sheltered waters of the strait are home to Canada's largest seaport and over two-thirds of the province's population.

The Sea Among Us is the first book to present a comprehensive study of the Strait of Georgia in all its aspects with chapters on geology, First Nations, history, oceanography, fish, birds, mammals,invertebrates and plants. Covering everything from tsunami modelling to First Nations history to barnacle reproduction, the book is a sweeping overview of the waterway. It describes how fjords formed, what the seafloor is made of, and why coastal BC is so prone to earthquakes; it advises on which jellyfish sting, how to tell the difference between Dall's and harbour porpoises, and where to find whales; and it addresses how climate change and human impacts could affect the strait, noting that though marine ecosystems are tough and adaptable, there are limits to this resiliency.

Informative, descriptive, cautionary and entertaining, The Sea Among Us is illustrated with attractive colour photographs, figures and drawings. It fills a place on the shelf of essential BC reference books beside The Encyclopedia of British Columbia and Marine Life of the Pacific Northwest.

Richard Beamish has a PhD in Zoology from the
University of Toronto and has worked for and with numerous research organizations. He is the recipient of the Prix d' Excellence, the Queen's Golden and Diamond Jubilee Medals, the Order of Canada and the Order of British Columbia. He was also a member of the International Panel on Climate Change that received the Nobel Peace Prize in 2007. He lives on Vancouver Island.

Gordon McFarlane spent 30 years as a researcher at the Pacific Biological Station in Nanaimo. He was a member and advisor to numerous international negotiating teams and participated in the development and conduct of a number of international research programs. He has authored more than 200 publications concerning the biology and assessment of marine resources. He lives on Vancouver Island, BC.

Other titles by Gordon McFarlane