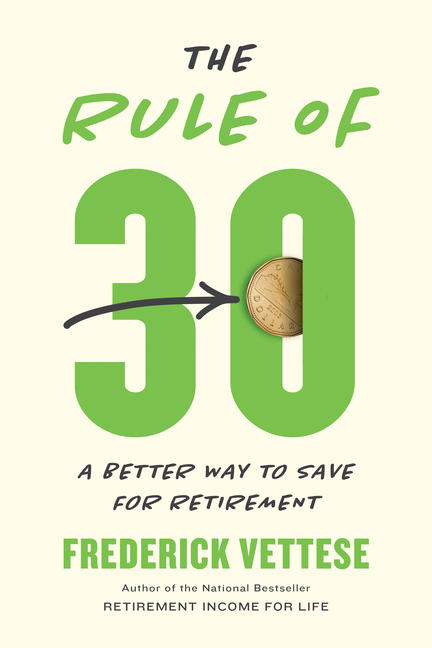 Consider the age-old question of how much you should save to enjoy a comfortable retirement: Are your knees knocking? Are you nervously biting your nails?

In The Rule of 30 personal finance expert Frederick Vettese provides a surprising — and hopeful — answer. Through conversations between a young couple and their neighbor, a retired actuary, the couple and the reader discover:

The Rule of 30 changes the mindset from saving the same flat percentage of pay to saving when it is most convenient to your situation. In most cases, it means less saving early on while mortgage payments are high and children are costly, and more saving later.

Saving for retirement is a high priority, but it is not the only priority in life. It is time to dispense with old myths like “just save 10% of your take-home pay.” The truth is we should save differently throughout our pre-retirement years — and The Rule of 30 is a road map for doing so.

Frederick Vettese is Chief Actuary of Morneau Shepell, a position he has held since 1991. He has written op-eds for the National Post and The Globe and Mail, and is frequently quoted regarding pension matters in various media. A prolific author of pension articles for a number of magazines and journals, he is also the author of two other books on retirement and has presented at various national conferences, such as the Conference Board of Canada and the Canadian Institute. Fred is a member of the C.D. Howe Institute Pension Policy Council and a Fellow of the Canadian Institute of Actuaries (FCIA). He provides consulting services to some of Morneau Shepell's largest clients and also oversees professional standards for the firm's 150 actuaries

Excerpt: The Rule of 30: A Better Way to Save for Retirement (by (author) Frederick Vettese)

“What exactly is a bear market?” asked Megan.

“It’s defined as a drop of at least 20 percent in a benchmark index like the S&P/TSX.”

“There have been at least eight of them since 1950,” Jim confirmed. “That is why there are so many years when overall stock returns are negative.”

“Is that bear market the reason that 1946-1975 turned out to be the worst-ever period?” Brett asked.

“It’s one reason. Another is that inflation starting rising in the mid-1960s and was still climbing by 1975. It caused interest rates to rise, which created losses in the bond portion of one’s portfolio.”

Jim consulted his chart for a few seconds, “The average real return in that period was 2.6 percent a year, compounded.”

“So even in the worst-ever 30-year period, our investments would still be beating inflation by 2.6 percent a year,” said Megan thoughtfully. “That doesn’t sound so bad.”

“For sure,” Jim agreed. “This chart here shows the average return over all 30-year periods, both in nominal and in real terms.”

Jim gave them a page with a chart labelled Figure 1.

Brett frowned, “Doesn’t the return depend on how you invest?”

“Absolutely,” says Jim. “I should have mentioned earlier that I’m assuming a 60-40 asset mix.

Jim noticed Brett and Megan exchanging glances so he added, “A 60-40 asset mix means 60 percent of the assets are invested in stocks (or at least in some pooled or mutual fund that is composed of stocks) while the other 40 percent is invested in bonds, in this case longer-term government of Canada bonds.”

While his audience digested that information, Jim continued, “I’m not saying that 60-40 is the ideal asset mix for you but it is pretty standard for pension funds and retirement saving in general. Later, we’ll try to improve on it but for now, let’s assume that your savings are invested in a 60-40 mix. Now I need to ask you two, how much are you currently earning?”

Brett hesitated a moment, “I have no problem in giving you that information, Jim, since you’re like our financial priest. But why is it important to know our earnings? Don’t people need to save the same percentage of pay whether they’re earning $25,000 or $250,000?”

“Actually, no,” Jim replied. “It is important to include your pensions from OAS and CPP to really understand your retirement-readiness. When you do that, you find that the higher your earnings, the more you might have to save in percentage terms since OAS and CPP become less and less important to your overall financial wellbeing.”

“Vettese’s superpower is to look at personal finance from a new perspective. In The Rule of 30 he strikes again, offering up a new, empowering and action-oriented approach to retirement savings.” — Bruce Sellery, CEO, Credit Canada and Money Columnist, CBC Radio

“The Rule of 30 offers new ideas and timeless wisdom for retirement saving, conversationally delivered by the friendly retired actuary next door. This is a must-read for anyone wondering how they can possibly save enough for retirement.” — Ben Felix & Cameron Passmore, Hosts, The Rational Reminder Podcast

“Do you want to retire comfortably? Start planning and executing now. Fred’s book, The Rule of 30, is a good blueprint to follow and reads like a story. Your future self will thank you.” — Robin R. Speziale, National Bestselling Author, Market Masters

“The Rule of 30 answers the question we’ve all been asking about expensive housing: How will young couples with big mortgages and daycare bills carve out room for retirement saving?” — Rob Carrick, Personal Finance Columnist, The Globe and Mail

“An accessible read that offers a fresh perspective on saving and investing for retirement.” — Money We Have

Other titles by Frederick Vettese