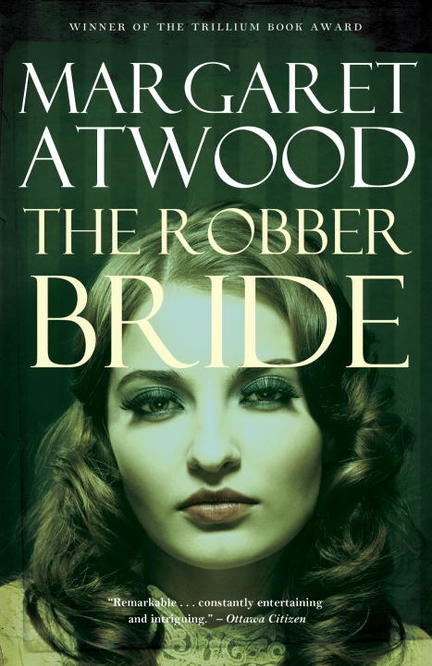 This is the wise, unsettling, drastic story of three women whose lives share a common wound: Zenia, a woman they first met as university students in the sixties. Zenia is smart and beautiful, by turns manipulative, vulnerable – and irresistible. She has entered into their separate lives to ensnare their sympathy, betray their trust, and exploit their weaknesses. Now Zenia, thought dead, has suddenly reappeared. In this richly layered narrative, Atwood skilfully evokes the decades of the past as she retraces three women’s lives, until we are back in the present – where it’s yet to be discovered whether Zenia’s “pure, free-wheeling malevolence” can still wreak havoc. The Robber Bride reports from the farthest reaches of the sex wars and is one of Margaret Atwood’s most intricate and subversive novels yet.

“Atwood has never written better than in this novel of glittering breadth and dark, eerie depths.”
–The Sunday Times (U.K.)
“A remarkable achievement, constantly entertaining and intriguing.”
–The Ottawa Citizen

“Deserves every superlative we can muster from hilarious to wise.…A genuine tour de force, witty and original, suspenseful and sagacious.”
–Booklist
“Funny, thoughtful, moving…Atwood’s plotting is masterful, and her humor is razor-edged, sexy, and raucous.”
Washington Post

“Nobody maps female psychic territory the way Margaret Atwood does.…What a treasure she is.”
–Newsweek