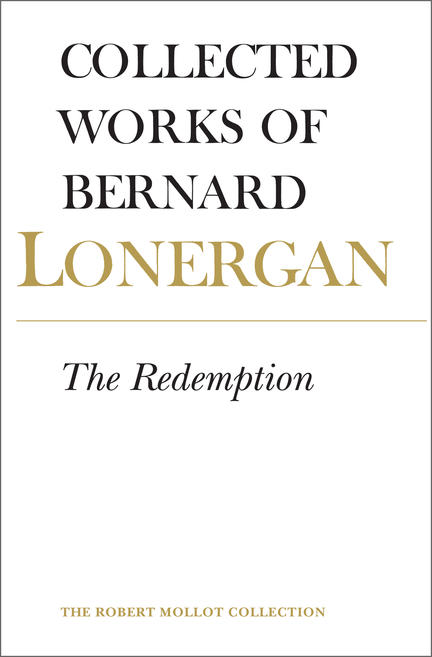 Thematically focused on the theology of redemption or what is called in theology "soteriology," each of the two sections of The Redemption addresses biblical literature and significant moments in the history of Christian theology, and especially the work of Anselm of Canterbury. The second part of the book presents a significant treatment of the problem of good and evil, and introduces the important category of cultural evil. Most significant from the standpoint of Lonergan's original contribution is the treatment accorded in both Part 1 and Part 2 to what he calls "the just and mysterious law of the cross." The treatment of biblical literature contains a valuable distinction between "redemption as end" and "redemption as medium." Beginning with theses 15-17 from Lonergan's Collected Works, The Incarnate Word, this volume also includes rare and never-before-published texts originally written in the late 1950s.

Bernard Lonergan (1904-1984), a professor of theology, taught at Regis College, Harvard University, and Boston College. An established author known for his Insight and Method in Theology, Lonergan received numerous honorary doctorates, was a Companion of the Order of Canada in 1971 and was named as an original member of the International Theological Commission by Pope Paul VI.

Robert M. Doran is the Emmett Doerr Chair in Systematic Theology and a professor in the Department of Theology at Marquette University. He is the general editor of the Collected Works of Bernard Lonergan.

Jeremy D. Wilkins is an associate professor of Systematic Theology and director of the Lonergan Research Institute at Regis College, University of Toronto.

H. Daniel Monsour is an associate editor of the Collected Works of Bernard Lonergan and holds a PhD in theology from the University of Toronto.

Michael G. Shields is the librarian at the Lonergan Research Institute, Regis College, University of Toronto, and translator of several volumes in the Collected Works of Bernard Lonergan.

Other titles by Bernard Lonergan

Other titles by Robert Doran

The Trinity in History

A Theology of the Divine Missions, Volume Two: Missions, Relations, and Persons

Other titles by Jeremy Wilkins

Other titles by H. Daniel Monsour

Other titles by Michael Shields