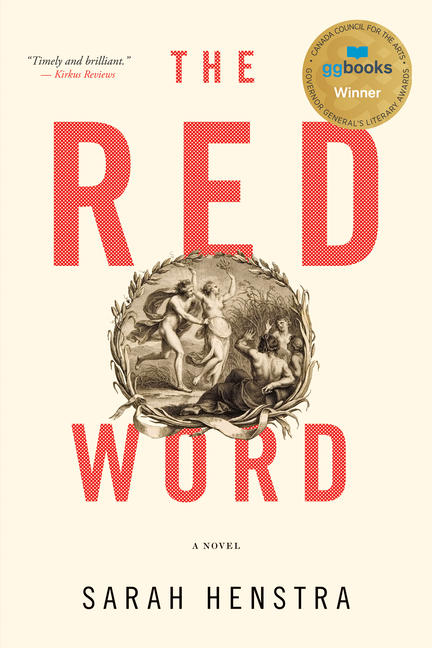 Winner of the 2018 Governor General's Literary Award for Fiction

A smart, dark, and take-no-prisoners look at rape culture and the extremes to which ideology can go The Red Word is a campus novel like no other. As her sophomore year begins, Karen enters into the back-to-school revelry — particularly at Gamma Beta Chi. When she wakes up one morning on the lawn of Raghurst, a house of radical feminists, she gets a crash course in the state of feminist activism on campus. The frat known as GBC is notorious, she learns, nicknamed “Gang Bang Central” and a prominent contributor to a list of rapists compiled by female students. Despite continuing to party there and dating one of the brothers, Karen is equally seduced by the intellectual stimulation and indomitable spirit of the Raghurst women, who surprise her by wanting her as a housemate and recruiting her into the upper-level class of a charismatic feminist mythology scholar they all adore. As Karen finds herself caught between two increasingly polarized camps, ringleader housemate Dyann believes she has hit on the perfect way to expose and bring down the fraternity as a symbol of rape culture — but the war between the houses will exact a terrible price.

The Red Word captures beautifully the feverish binarism of campus politics and the headlong rush of youth toward new friends, lovers, and life-altering ideas. With strains of Jeffrey Eugenides’ The Marriage Plot, Alison Lurie’s Truth and Consequences, and Tom Wolfe’s I Am Charlotte Simmons, Sarah Henstra’s debut adult novel arrives on the wings of furies.

Sarah Henstra is a professor of English at Ryerson University. She is the author of the young adult novel Mad Miss Mimic. This is her first work of adult fiction. She lives in Toronto.

“Henstra draws on Greek mythology to comment on contemporary issues — how assault can take on ambiguity and how the internalization of rape culture convolutes gender politics, to the point where constructive conversation is nearly impossible.”  — The New Yorker

“A timely and nuanced dissection of rape culture.” — Booklist

“Groundbreaking and provocative, this is an astonishing evisceration of the clichés of sexual politics as they exist not only on our college campuses, but also within broader present-day society. Alternately heartbreaking, funny, and critical, no one gets off easily. The Red Word plumbs the depths of literature, mythology, history, philosophy, and a host of contemporary issues — an utterly effing good read.” — Governor General’s Literary Awards Jury

Other titles by Sarah Henstra

Sarah Henstra on The Red Word

The Red Word has been lauded by no less than Tom Perrotta as "the smartest, most provocative novel I’ve read in a long time."

Ten Books to Pick Up on International Women's Day

Today and all days, we celebrate books by Canadian women and their remarkable stories.