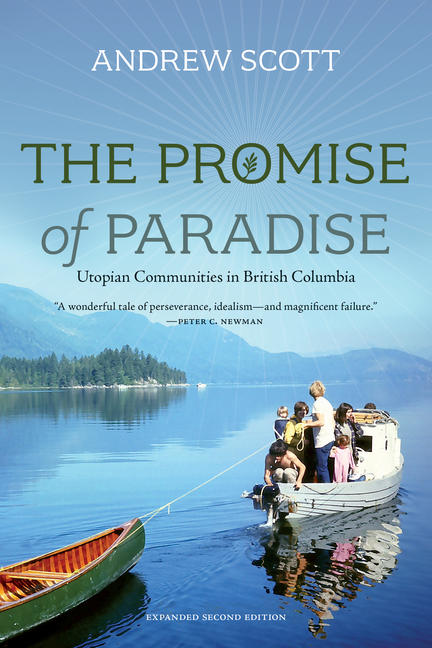 The West has long attracted visionaries and schemers from around the world. And no other region in North America can outstrip British Columbia for the number of utopian or intentional settlement attempts in the past 150 years. Andrew Scott delves into the dramatic stories of these fascinating, but often doomed, communities.

From Doukhobor farmers to Finnish coal miners, Quakers and hippies, many groups have struggled to build idealistic colonies in BC's inspiring landscape. While most discovered hardship, disillusionment and failure, new groups sprang up--and continue to spring up--to take their place.

Meet the quick-tempered, slave-driving Madame Zee (partner of the infamous Brother XII), who reportedly beat followers with a riding crop. Hear from Richard "The Troll" Schaller, who founded the Legal Front Commune, General Store and Funny Food Farm on the Sunshine Coast, setting off a storm of hostility from locals. Congregate with Jerry LeBourdais and fellow members of the Ochiltree Organic Commune, who rebelled from hippie communes by embracing meat eating and coffee drinking.

With careful research and engaging first-person accounts, Scott sifts through the wreckage of the utopia-seekers' dreams and delves into the practices and philosophies of contemporary intentional communities. This book is a compendium of astounding misadventures as well as an intriguing analysis of what moves people to search for paradise.

Andrew MacLeod is the BC Legislative Bureau Chief for TheTyee.ca website. His first book, A Better Place on Earth (Harbour Publishing, 2015), won the George Ryga Award for Social Awareness in Literature. He won a 2006 Association of Alternative Newsweeklies award for news writing and was a finalist for a 2007 Western Magazine Award for best article in BC and the Yukon. His reporting has appeared in Monday Magazine, The Georgia Straight, BCBusiness Magazine, 24 Hours, the San Francisco Bay Guardian, Detroit’s MetroTimes, Portland’s Willamette Week and elsewhere. Andrew lives in Victoria, BC.

Other titles by Andrew MacLeod

A Better Place on Earth

The Search for Fairness in Super Unequal British Columbia