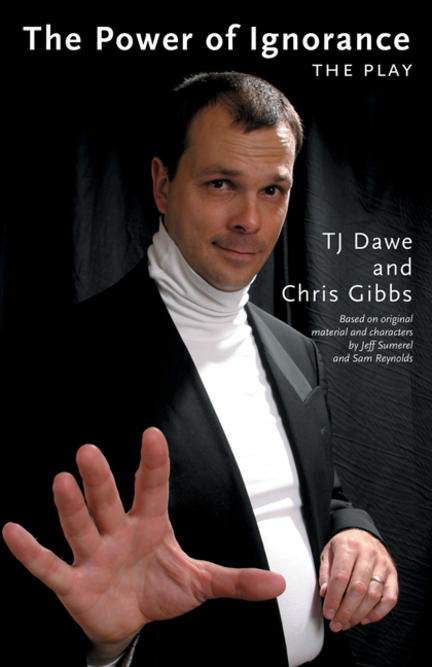 Your brain cells are prison cells! Break free with The Power of Ignorance, the smash Fringe play! Join certified Ig-master Vaguen on the road to bliss. You might think that ignorance comes naturally, but on the contrary, the world conspires to cram our heads full of useless and dangerous know-ledge every day. Fall off this knowledge into the safe and comforting world of oblivio(n/ousness) by discovering The Power of Ignorance. In this playscript Vaguen is featured at one of his seminars where he helps successful people, wealthy people, good-looking people, and people just like you to attain the heights/depths of ignorance.

TJ Dawe is a Vancouver-based arts guy. He has written and performed eleven solo shows and participated in more than eighty theatre and comedy festivals. He's done extensive work co-writing and/or directing a bunch of other shows, including "The Power of Ignorance" and "The One Man Star Wars Trilogy" which played for five months Off-Broadway in New York and has been touring the world since 2002. He was named Touring Artist of the Year by the BC and Alberta Arts Council in 2004. TJ's publishing credits include: Labrador (Brindle & Glass, 2003), The Slip-Knot (Brindle & Glass, 2003), and co-authored with Chris Gibbs, The Power of Ignorance: The Play and the companion humour book The Power of Ignorance: 14 Steps to Using Your Ignorance (Brindle & Glass 2006). Various plays of his have been produced in Canada, the US and overseas. He's recently started a podcast series titled "Totem Figures" (available on iTunes and at www.totemfigures.com) interviewing people about who or what would be on their own personal Mt. Rushmore. He continues to write, perform, direct, dramaturg, tour and collaborate. He also blogs, tweets and has stuff on youtube. Please visit www.tjdawe.com.

Born in England, Chris "Hilarious" Gibbs first came to Canada in 1995 as one half of the comedy duo HOOPAL, who won numerous awards, including the prestigious I Laughed So Hard I Damaged My Intercostal Muscles Award for best comedy at the Wellington Fringe. He moved to Canada in 2002. His first solo show, Gibberish, was acclaimed as "comic genius" (Edmonton Sun) and won the Best of the Fest Showcase Award at the Winnipeg Fringe. He lives in Toronto. Please visit www.chrisgibbs.ca.

This is the funniest piece I have ever seen at any of the thirteen fringes I have attended. —Janet Coutts, Montreal.com

Other titles by T.J. Dawe