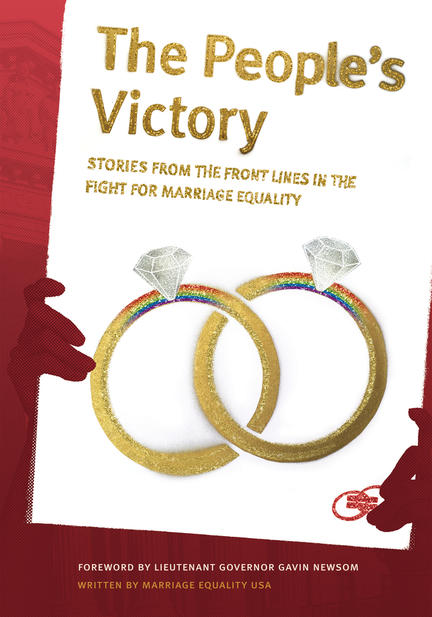 "The People’s Victory is a mirror for each of us to see our own power to fight for justice and create the change we want to see in our world.” – Gavin Newsom, Lieutenant Governor of California

In 1996, a small group of Americans from all walks of life banded together to create one of the most miraculous political victories in modern American history. Opponents attacked the issue of marriage equality as amoral and a direct threat to families. Allies warned that it was a generation away from being practicable and a selfish drain of precious political capital.

A stirring oral history told by those who almost inexplicably found themselves fighting on the front lines, The People's Victory recounts the successes – and the setbacks – that only served to strengthen everyone’s resolve to resist, fight, and bring equal marriage rights to an entire nation. Through it all, these love warriors found their voice and home in Marriage Equality USA, the nation’s oldest and largest grassroots organization of its kind. While high profile books, articles and documentaries have covered the judicial and legislative machinations, this book puts a human face on the people who made the everyday personal sacrifices to keep the movement alive.

The People’s Victory shares deeply moving personal testimonies of over sixty people, from Marvin Burrows, who was forced out of his home and lost many treasured possessions after losing his lost his partner of fifty years; to Kate Burns, who risked arrest for the first time when she stood up for her relationship; to Mike Goettemoeller, who pushed his mother in a wheelchair with Marriage Equality USA to fulfill her dream of marching in a Pride parade.

Edie Windsor, the triumphant lead plaintiff in the Supreme Court case United States vs. Windsor recounts shouting down a major LGBTQ organization with “I’m 77 years old and I can’t wait!!” when they attempted to belittle marriage as a critical issue. Writer and producer Del Shores shares the touching moment his young teenage daughter used tears and laughter to console him after the passage of Proposition 8 in California dealt a blow to the cause.

The People’s Victory is an inspirational roadmap for anyone who has felt passionately about an issue, but has questioned whether one person’s contribution can make a difference. These candid accounts once again prove that every movement for important social change must be built on the acts of everyday. In fact, that is the only way the people have ever been victorious.

In his introduction, California Lieutenant Governor Gavin Newsom writes: “I hope these stories inspire you to resist, to fight, to win and in the end write the next stories in our continuing push for a more just and perfect union.”

Christine Allen lived and worked on Killara Farm in Langley, BC, from 1993 to 2006. Since then she and her husband, Michael Kluckner, have lived in Australia, returning to Vancouver in 2010. Allen is a regular contributor to GardenWise and other magazines, and has written a number of books, including Gardens of Vancouver (Raincoast, 2000) and Roses for the Pacific Northwest (Steller, 1999).

David Thompson is a general building contractor who has lived in the Yukon Territory since 1962. His love for the land and its people has inspired him to write short stories describing life in the Yukon. He has twice won Dawson City’s “Authors on Eighth” writing contest for short fiction and has had stories published in local newspapers. David lives in Whitehorse with his wife Wendy, a Montessori teacher, two children Adam and Shawna, son-in-law Gary and two wonderful grandsons, Cameron and Jordon.

Other titles by Christine Allen

A Year at Killara Farm

Other titles by John Lewis

A Child's Preventable Death. A Struggle for Truth, Healing, and Change

Other titles by Scott Smith

Other titles by David Thompson

A Fresh Approach to Thai Cooking

by (author) Angus An
foreword by David Thompson & Normand Laprise

Talking at the Woodpile

The Political Forms of Modern Society

Other titles by Jan Thompson