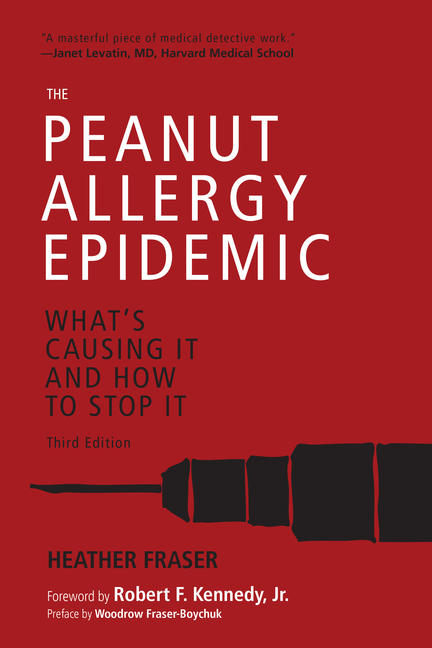 Essential reading for every parent of a child with peanut allergies?third edition with a foreword by Robert F. Kennedy, Jr.

Why is the peanut allergy an epidemic that only seems to be found in western cultures? More than four million people in the United States alone are affected by peanut allergies, while there are few reported cases in India, a country where peanut is the primary ingredient in many baby food products. Where did this allergy come from, and does medicine play any kind of role in the phenomenon? After her own child had an anaphylactic reaction to peanut butter, historian Heather Fraser decided to discover the answers to these questions.

In The Peanut Allergy Epidemic, Fraser delves into the history of this allergy, trying to understand why it largely develops in children and studying its relationship with social, medical, political, and economic factors. In an international overview of the subject, she compares the epidemic in the United States to sixteen other geographical locations; she finds that in addition to the United States in countries such as Canada, the United Kingdom, Australia, and Sweden, there is a one in fifty chance that a child, especially a male, will develop a peanut allergy. Fraser also highlights alternative medicines and explores issues of vaccine safety and other food allergies.

This third edition features a foreword from Robert F. Kennedy, Jr. and a new chapter on promising leads for cures to peanut allergies. The Peanut Allergy Epidemic is a must read for every parent, teacher, and health professional.

Janet Levatin, M.D., is a board certified pediatrician and clinical instructor in pediatrics at Harvard Medical School. She is a graduate of The George Washington University School of Medicine, and has been a pediatrician since 1982. Dr. Levatin is a member of the Massachusetts Medical Society and the American Institute of Homeopathy. She lives in Boston and the Berkshires.

“For those of you who, like me, want to solve the food allergy mystery, Heather’s book cracks the code.”
—Robert F. Kennedy, Jr., from the Foreword

“Fraser has created a necessary text for anyone concerned with allergies, anaphylaxis, or the rise in life-threatening reactions to peanuts, which has become widespread and epidemic.”
—Mark Blaxill, co-founder of Health Choice and the Canary Party, coauthor of The Age of Autism

“The Peanut Allergy Epidemic is a masterful piece of medical detective work. Fraser has succeeding in doing what numerous specialists have proven unable to do—she has uncovered the cause of this iatrogenic phenomenon and given us an elegant explanation for why and how peanut allergy/anaphylaxis has emerged as a modern-day epidemic. With meticulous and thorough research and documentation, she explores and discredits the various theories that have been proposed as explanations for the rise in peanut allergy sufferers. . . . [It] is a vital, groundbreaking book, covering material that resides at intersection of medicine, history, and public policy. I believe it should be required reading for everyone who administers injections, everyone who receives injections, and everyone who authorizes injections for children.”
—Janet Levatin, board-certified pediatrician, clinical instructor in pediatrics, Harvard Medical School

“Phenomenal detective work! Heather Fraser weaves history, medicine, and science into a convincing hypothesis to solve a modern medical mystery. The Peanut Allergy Epidemic explains the origins and recent dramatic rise in incidence of peanut allergy in particular, but also provides a context for a wide range of other increasingly common immunological diseases. It should be required reading for pediatricians. I hope it is read by parents and prospective parents everywhere before blindly consenting to prophylactic medical interventions for their children.”
—Jamie Deckoff-Jones, M.D., graduate of Harvard University and Albert Einstein College of Medicine

“As it tends to be with many autoimmune epidemics, more than one road leads to the development of the peanut allergy. It’s Heather Fraser who makes a convincing argument that the four-way intersection of Newborn General Consent for Treatment, Novel Pharmaceutical Frontiers, Public Health Policy Goals, and Immunization Administration Convenience, paved the way for the high-speed anaphylactic expressway that is our “new normal” today. In a world where scientific research demands thorough investigation into all causes of the allergy epidemic but one, Heather Fraser stands alone, shining her light on the stones intentionally left unturned for the last quarter of a century.”
—Robyn Ross, B.S., J.D., allergy advocate

“When we forget the history, we are bound to repeat it. In her book The Peanut Allergy Epidemic, Heather Fraser unravels the forgotten history of food allergy. She masterfully demonstrates how, time and again, bizarre appearance and waning of widespread allergies to certain foods in human populations has followed the introduction and then withdrawal of specific medical formulations delivered by injection. Prior mass occurrences of allergy to specific foods came and went, but a modern epidemic of deadly peanut allergy is still expanding. Are we to accept this epidemic without asking why it is happening? Or should we strive to recognize the immunologic cause so that the epidemic can be halted? The history of clinical and immunologic research illuminated by The Peanut Allergy Epidemic paves the way to finding the cause that will first be vehemently denied, then ridiculed, and finally accepted.”
—Tetyana Obukhanych, PhD, author of Vaccine Illusion

“Heather Fraser has written an important book that points to a false cost-benefit— in both economic and medical terms—in mass vaccinations. This is a compelling work on a subject that is taboo to the mainstream media.”
—Lawrence Solomon, columnist, Financial Post and executive director of Energy Probe

“This magnificent book is in a rare class of books that present impeccable scientific evidence in prose that is accessible to the educated lay public, while slowly unfolding a gripping mystery that grabs the reader’s attention all the way through. If Heather Fraser is right about the link between vaccines and peanut allergy, and the evidence speaks for itself, then it opens up the frightening possibility that vaccines play a major role in all the food allergies that beset today’s children.”
—Dr. Stephanie Seneff, senior research scientist, MIT Computer Science and Artificial Intelligence Laboratory

“In a masterful account, historian Heather Fraser illuminates the statistics, theories and politics of the peanut allergy epidemic, revealing intriguing parallels between this debacle and what other contemporary public health controversies, such as autism, face. This book is a must-read for anyone who wants to gain a broader perspective on the politics of public health.”
—Teri Arranga, director of AutismOne, editor in chief, Autism Science Digest

“The Peanut Allergy Epidemic, by Heather Fraser, is a book which has been eagerly anticipated by anyone dealing with food allergy, including parents, physicians, nurses, and teachers. Extensively researched and entertainingly written, the book contains a wealth of information about the history and origins of the epidemic of peanut allergy which has occurred in the past twenty years, as well as the vaccines and their additives that we have injected into our children in ever-increasing amounts over the same time period. It reads like a detective novel, but is all well documented, and astonishingly true. This book should be required reading not only for parents and physicians dealing with peanut allergy, but anyone connected to the vaccine industry or the Food and Drug Administration. Congratulations to Heather Fraser for having the courage to tell a story which will not be well received by the medical establishment, but needed to be told anyway.”
—Roger A. Francis, M.D., practicing physician in Nevada, Missouri, parent of Tony, age 15, with autism and peanut allergy

“Why are children increasingly developing sometimes fatal allergies to peanuts? The answer may lie in Heather Fraser's well-written and well-researched book on the topic of childhood allergies, The Peanut Allergy Epidemic. Part mystery story, part scientific inquiry, Fraser's book should raise a lot of questions and open some previously closed minds.”
—Christopher A. Shaw, Ph.D., professor, Department of Ophthalmology and Visual Sciences, University of British Columbia

Other titles by Heather Fraser

What's Causing It and How to Stop It

How to Tackle Your Toughest Innovation Challenges through Business Design

In the Name of Love

Women's Narratives of Love and Abuse

Other titles by Janet Levatin

What's Causing It and How to Stop It