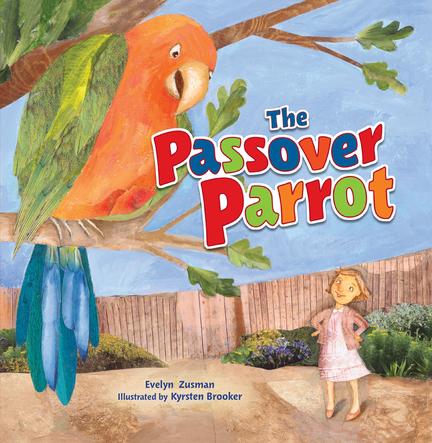 It's Lily's turn to say the Four Questions at the Passover Seder, but nobody will help her practice. Things change with the arrival of Hametz the Parrot. Clever Hametz not only helps Lily but solves the puzzle of who stole the afikomen! Back by popular demand, the newly illustrated The Passover Parrot will delight a new generation of children.

Evelyn Zusman was a noted and beloved Hebrew school teacher in New York and Los Angeles, as well as an author of several Jewish children’s books. She is best known for her book Passover Parrot, celebrating its 35th anniversary in this edition.

KYRSTEN BROOKER studied illustration at Pratt Institute in Brooklyn and has since illustrated over twenty books for children, including Chik Chak Shabbat by Mara Rockliff and The Poem That Will Not End, written by Joan Bransfield Graham. She lives with her family in Edmonton.

"In celebration of the 35th anniversary of its initial publication, Kar Ben has issued a new edition of The Passover Parrot with full color illustrations. Leba is finally old enough to ask the four questions in Hebrew at her family seder. Her neighbor is moving out of town and gives Leba her pet parrot. Leba wants to practice the Mah Nishtanah, but the entire family is too busy to help. Hametz , the parrot, is soon chanting the Four Questions , phrase by phrase as Leba practices. During the Seder, Hametz is banished for repeating after Leba! There is a problem when the afikomen can’t be found. Leba saves the Seder with a little help from Hametz. The bright new color illustrations enhance the original text. Most of the drawings are reminiscent in style and format of the original. The illustrations help to modernize the story, though it has an intentional 1950’s flavor. One of the brothers now wears jeans and the two pages at the end without illustration, used to create a suspenseful ending, have been eliminated." - Association of Jewish Libraries

"Zusman's story of how a chatty bird becomes comically enmeshed in a family's seder returns for its 35th anniversary with new illustrations and shifts in tone that range from subtle to significant. The narrator is now named Lily instead of Leba, and she seems younger and more wide-eyed than her predecessor. Brooker's artwork—a dense mélange of collage and watercolors—is decidedly more heimish than the impressionistic ink drawings of the original. But the story's core remains the same: the parrot is adopted by Lily's family, is named Hametz, and becomes a feathered sounding board as Lily practices the seder's Four Questions in Hebrew. Zusman died in 1995, but her authorial voice lives on in these pages: it's like hearing a story from a bubble who adores her family—foibles, follies, and all. Ages 3-8." - Publisher's Weekly

"It’s time for Leba to ask the Four Questions at the Passover seder. But nobody will assist her. That is until Hametz the Parrot arrives and he not only helps her, but also solves the dilemma of who stole the a? komen – the hidden piece of matzah. This is the 25th anniversary edition in a newly illustrated book." - Cleveland Jewish News

Other titles by Kyrsten Brooker

Dinner with the Highbrows

A Story about Good (or Bad) Manners

The Poem That Will Not End

Fun with Poetic Forms and Voices

When We Go Walking

The Prince Won't Go to Bed!