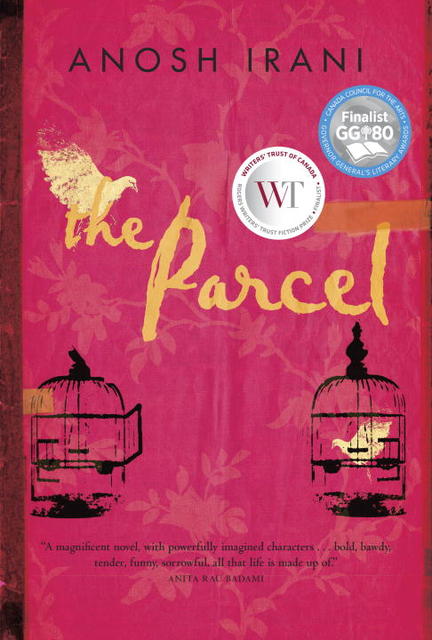 Finalist for the Writers' Trust Fiction Prize and for the Governor General's Literary Award, this powerful new work, about a transgender sex worker in the red-light district of Bombay who is given an unexpected task, is a gripping literary page-turner--difficult and moving, surprising and tender. Anosh Irani's best novel yet, and his first with Knopf Canada.
The Parcel's astonishing heart, soul and unforgettable voice is Madhu--born a boy, but a eunuch by choice--who has spent most of her life in a close-knit clan of transgender sex workers in Kamathipura, the notorious red-light district of Bombay. Madhu identifies herself as a "hijra"--a person belonging to the third sex, neither here nor there, man nor woman. Now, at 40, she has moved away from prostitution, her trade since her teens, and is forced to beg to support the charismatic head of the hijra clan, Gurumai. One day Madhu receives a call from Padma Madam, the most feared brothel owner in the district: a "parcel" has arrived--a young girl from the provinces, betrayed and trafficked by her aunt--and Madhu must prepare it for its fate. Despite Madhu's reluctance, she is forced to take the job by Gurumai. As Madhu's emotions spiral out of control, her past comes back to haunt her, threatening to unravel a lifetime's work and identity. This is a dark, devastating but ultimately redemptive novel that promises to be one of the most talked-about publications of the year.

ANOSH IRANI has published four critically acclaimed and award-winning novels: The Cripple and His Talismans (2004), a national bestseller; The Song of Kahunsha (2006), which was an international bestseller and shortlisted for Canada Reads and the Ethel Wilson Fiction Prize; Dahanu Road (2010), which was longlisted for the Man Asian Literary Prize; and The Parcel (2016), which was a finalist for the Governor General’s Literary Award for Fiction and the Writers’ Trust Fiction Prize. His play Bombay Black (2006) won the Dora Mavor Moore Award for Outstanding New Play, and his anthology The Bombay Plays: The Matka King & Bombay Black (2006) and his play Men in White were both shortlisted for the Governor General’s Literary Award for Drama. Buffoon, his latest work of drama, was critically acclaimed and won two Dora Mavor Moore Awards, for Outstanding New Play and Outstanding Performance in a Leading Role. He lives in Vancouver.

Prologue
I go by many names, none of my own choosing.
I am called Ali, Aravani, Nau Number, Sixer, Mamu, Gandu, Napunsak, Kinnar, Kojja—the list goes on and on like a politician’s promise. There is a term for me in almost every Indian language. I am reviled and revered, deemed to have been blessed, and cursed, with sacred powers. Parents think of me as a kidnapper, shopkeepers as a lucky charm, and married couples as a fertility expert. To passengers in taxis, I am but a nuisance. I am shooed away like a crow.
Everyone has their version of what I am. Or what they want me to be.
My least favourite is what they call my kind in Tamil: Thirunangai.
"Mister Woman."
Oddly, the only ones to get it right were my parents. They named their boy Madhu. A name so gloriously unisex, I slipped in and out of its skin until I was fourteen. But then, in one fine stroke, that thing between my legs was relieved of its duties. With the very knife that I hold in my hand right now, I became a eunuch.
Perhaps my parents had smelled the strangeness in the air when I was born, the stench of the pain and humiliation to follow. At the least, they must have felt a deep stirring in the marrow of their bones to prepare them for the fact that their child was different.
Neither here nor there, neither desert nor forest, neither earth nor sky, neither man nor woman.
The calling of names I made my peace with years ago.
The one I am most comfortable with, the most accurate of them, is also the most common: hijra. The word is Urdu for "migration," and we hijras have made it our own because its meaning makes sense to us.
I am indeed a migrant, a wanderer. For almost three decades, I have floated through the city’s red-light district like a ghost. But this home of mine, this garden of rejects—fourteen lanes that for the rest of the city do not exist—I want it to remember me. I want it to remember even though the district is dissolving, just like I am, like the hot vapour of chai.
Come on. Who am I fooling? I don’t taste like chai. I am anything but delectable. I have been born and brewed to mortify. At forty, all I have left is a knife dipped in the moon and a five-rupee coin given to me by my mother.
But mark my words: I will make myself a household name. I will spread my name like butter on these battered streets.

“As engrossing as any thriller, Anosh Irani’s novel offers readers so much more. An aggregate of storytelling accomplishments, The Parcel captivates with its vividly rendered characters. . . . Deeply affecting.” —The Quill and Quire

“A magnificent novel with powerfully imagined characters . . . bold, bawdy, tender, funny, sorrowful, all that life is made up of.” —Anita Rau Badami, author of The Hero's Walk

“Part of the way this excellent book heals such a sprawling, horrifying reality is with beauty. . . .” —The Globe and Mail

“As engrossing as any thriller, Anosh Irani’s fourth novel offers readers so much more. An aggregate of storytelling accomplishments, The Parcel captivates with its vividly rendered characters and commands the reader’s attention by way of unnerving—and at times profoundly disturbing—portraiture of an abject group at the bottom of an already denigrated community at the heart of India’s booming financial hub, Mumbai. . . . Irani leads readers on a memorable walking tour through what is likely alien territory for them. . . . The various episodes in the novel are deeply affecting, giving the reader ample reason to agonize over the fact that such a place exists at all. Irani’s compassion for these discarded souls, and the assertion of their essential dignity, renders them simultaneously touching and distressing.” —Quill & Quire (starred review)
"Set amid the raucous swirl of Bombay’s Kamathipura Red Light District, The Parcel is a searing indictment of the sex trafficking industry and a compassionate portrait of a troubled but resilient community. In Madhu, the transgender, retired prostitute at the heart of the novel, Anosh Irani has created a powerful yet flawed character to steward the reader through difficult, often disturbing material. Her struggles—with her past, with the legacy she might leave behind—are rendered with honesty and grace. Harrowing, enraging, unexpectedly humorous, and also profoundly sad, The Parcel is a haunting work of fiction that illuminates the ways in which history, both political and personal, pervades the present day." —2016 Rogers Writers’ Trust Fiction Prize Jury Lauren B. Davis, Trevor Ferguson, and Pasha Malla
“Irani takes readers into the depths of Mumbai’s teeming Kamathipura district, whose economy depends on prostitution bordering on slavery. The story centres on eunuch and former sex worker Madhu—now a beggar and sometime aid to a powerful madam—who is called on to groom a pre-teen Nepalese girl for work in the brothel. Sounds grim, but Irani’s ear is attuned to the raucous humour of the sex workers as they do what they can to maintain their dignity. A harsh dose of reality administered with wit and clarity.” —NOW

“[A]rresting. . . . A searing, disturbing, and intimate portrait of Kamathipura . . . his novel exposes a heartbreaking reality.” —The Vancouver Sun

“Irani’s novel does not flinch from its dark subject matter, and is already being buzzed about as one of the most provocative works of the fall season.” —Quill & Quire

“The Parcel showcases the perceptive acid-streaked sensibility that distinguishes Irani’s novels and plays. . . . As in Irani’s novel The Song of Kahunsha . . . disenchantment remains a primary motif in The Parcel. But though Irani makes the hell of slums visceral on his pages, he offers here the ways feral compassion can turn to grace.” —National Post
“Anosh Irani’s The Parcel is a dark, intimate and probing look at Kamathipura’s Hijra community through the eyes of its protagonist Madhu. . . . Madhu’s moments of realisation are evocatively captured, as the reader plays silent companion to her travails and by default, the lesser-known, insightful side to the Hijra community. . . . Dark, disturbing and yet triumphant . . . riveting twists and turns. High on drama and emotion set in the seamier side of Mumbai, this novel is a page-turner.” —Mid-day (India)

Other titles by Anosh Irani

Translated from the Gibberish

Seven Stories and One Half Truth

The Men in White

The Cripple and His Talismans