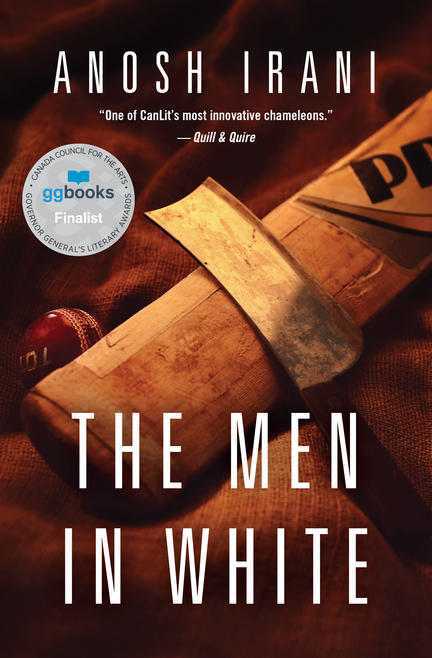 A finalist for the Governor General’s Award for Drama, The Men in White explores urgent themes surrounding the complexities of the modern immigrant experience, Islamophobia, and the unifying power of sport — the masterful playwright and novelist Anosh Irani at his finest.

Eighteen-year-old Hasan Siddiqui lives in a bustling Muslim quarter of Bombay. He escapes the drudgery of his work at a chicken slaughterhouse by fostering two fervent dreams — to become a star in cricket, a sport at which he happens to excel, and to win the affections of Haseena, a fiercely intelligent young woman two years his junior.

Half a world away in Vancouver, Hasan’s older brother, Abdul, has been working under the table at an Indian restaurant, attempting to set down roots with the hope of one day reuniting with his brother. For Abdul the immigrant dream shows little sign of materializing, but he finds solace in his amateur cricket team. When he and the team’s captain decide to take action to end their losing streak, they talk of recruiting the talented Hasan for the rest of the season. But bringing Hasan from India to Canada will take much more than just a plane ticket, and rising tensions demonstrate that not all members of the team agree with the high cost.

ANOSH IRANI has published four critically acclaimed and award-winning novels: The Cripple and His Talismans (2004), a national bestseller; The Song of Kahunsha (2006), which was an international bestseller and shortlisted for Canada Reads and the Ethel Wilson Fiction Prize; Dahanu Road (2010), which was longlisted for the Man Asian Literary Prize; and The Parcel (2016), which was a finalist for the Governor General’s Literary Award for Fiction and the Writers’ Trust Fiction Prize. His play Bombay Black (2006) won the Dora Mavor Moore Award for Outstanding New Play, and his anthology The Bombay Plays: The Matka King & Bombay Black (2006) and his play Men in White were both shortlisted for the Governor General’s Literary Award for Drama. Buffoon, his latest work of drama, was critically acclaimed and won two Dora Mavor Moore Awards, for Outstanding New Play and Outstanding Performance in a Leading Role. He lives in Vancouver.

The play feels so contemporary; its themes — Islamophobia, immigration — are obviously very of the moment, taking on a new urgency of late… . I am glad a playwright of Irani’s calibre is dealing with them.

Other titles by Anosh Irani

Translated from the Gibberish

Seven Stories and One Half Truth

The Cripple and His Talismans

New Books from Authors You Know and Love