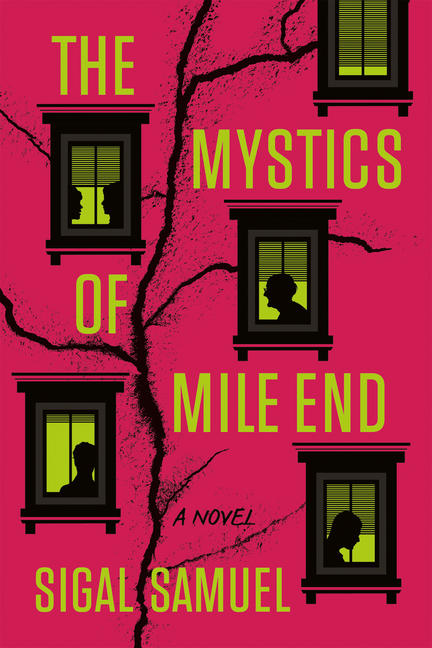 Four distinct voices weave together the tale of a dysfunctional Montreal family obsessed with climbing the Kabbalah’s Tree of Life. This literary debut by Jewish Daily Forward editor Sigal Samuel is reminiscent of Nicole Krauss’s The History of Love and Myla Goldberg’s Bee Season. The Meyer family lives in Mile End, home to a mashup of hipsters and Hasidic Jews, where down the street crazy Mr. Katz is building a tree out of plucked leaves, toilet paper rolls, and dental floss. When David, a skeptical professor of religion, is diagnosed with an unusual heart murmur, he becomes convinced that his heart is whispering divine secrets. But when David’s frenzied attempts to ascend the Tree of Life lead to tragedy, his daughter Samara, who abruptly abandoned religion years earlier, believes it is up to her to finish what she started. As Samara’s brother documents her increasingly strange behaviour, it falls to next-door neighbour and Holocaust survivor Chaim Glassman to shatter the silence that divides the members of the Meyer family. But can he break through to them in time? Long-held family secrets square off against faith and secularity in this remarkable debut novel, written with extraordinary heart and intelligence.

Sigal Samuel is an award-winning fiction writer, journalist, essayist and playwright. Currently a writer and editor for the Jewish Daily Forward, she previously worked for The Daily Beast. She has also published work in The Rumpus, BuzzFeed, The Walrus, and This Magazine, among others. She has been a featured writer at the Blue Metropolis International Literary Festival, a winner of Room Magazine's writing contest, and a two-time finalist in Event Magazine's nonfiction contest. An accomplished playwright, Sigal has written and produced six plays in Montreal, Vancouver and New York, two of which garnered national awards. She received her MFA in Creative Writing from the University of British Columbia in 2012. Originally from Montreal, she now lives and writes in Brooklyn.

"Brimming with magic and mystery, The Mystics of Mile End tells the story of a family haunted by secrets and loss, and the ways in which they try to wrest meaning out of their lives. Sigal Samuel fearlessly delves into the esoteric world of Jewish mysticism and its intersection with urban life in modern-day Montreal. Engaging, tender, intelligent, this is a remarkable debut from a promising new literary voice."

“The Mystics of Mile End (Freehand Books), a first novel by former Montrealer Sigal Samuel, captures the spirit of the duality of one of the world’s most vibrant neighborhoods. At once an exploration of Kabbalah, queer culture and physics, the book is a family saga that grapples with the tensions between science and faith. To discover a new writer with so much talent and potential is a singular thrill.”

Other titles by Sigal Samuel

Osnat and Her Dove

The True Story of the World's First Female Rabbi

Mystics of Mile End, The