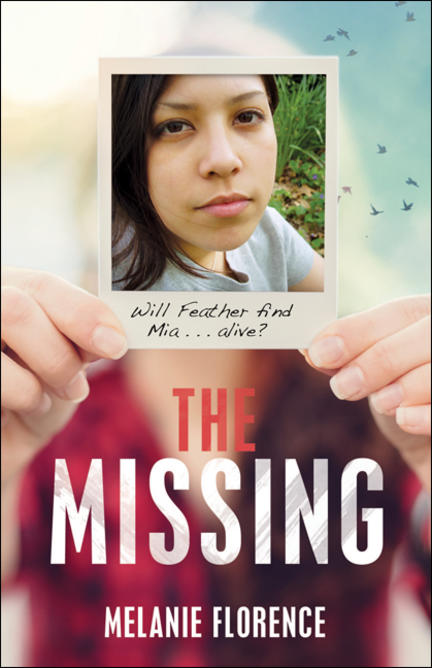 After a girl she knows from school goes missing and is found dead in the Red River, Feather is shocked when the police write it off as a suicide. Then, it's Feather's best friend, Mia, who vanishes — but Mia's mom and abusive stepfather paint Mia as a frequent runaway, so the authorities won't investigate her disappearance either. Everyone knows that Native girls are disappearing and being killed, but no one is connecting the dots.

When Feather's brother Kiowa is arrested under suspicion of Mia's abduction, Feather knows she has to clear his name. What Feather doesn't know is that the young serial killer who has taken Mia has become obsessed with Feather, and her investigation is leading her into terrible danger.

Using as its background the ongoing circumstance of unsolved cases of missing and murdered Aboriginal women, this fictional thriller set in Winnipeg explores one teenager's response to a system that has long denied and misrepresented the problem.

MELANIE FLORENCE is an award-winning writer of Cree and Scottish heritage based in Toronto, Ontario. She is the author of Missing Nimâmâ, which won the 2016 TD Canadian Children’s Literature Award, the 2017 Forest of Reading Golden Oak Award and was a finalist for the 2017 First Nation Communities READ award. Her most recent picture book, Stolen Words, won the Ruth and Sylvia Schwartz Children’s Book Award and was a finalist for the Marilyn Baillie Picture Book Award. Her other books include Righting Canada’s Wrongs: Residential Schools and the teen novels Just Lucky, He Who Dreams, The Missing, One Night, and Rez Runaway. Visit her at https://www.melanieflorence.com/.

"Many teens will be surprised to learn the statistics concerning violence against Aboriginal women in Canada that are quoted by Feather and her mother are true, as are the concerns about inadequate police investigation in cases of missing or murdered Native women. True to reality, Mias story does not end happily. This quick-paced thriller will appeal to reluctant readers and fans of shows like Law & Order."

"There are a lot of serious subjects tackled in the book, such as the disappearance of Native girls being ignored by the police, anti-gay sentiments, child abuse, and victim blaming ... The book is written for reluctant readers, and achieves the aim of mature subjects written in easier language."

"This book is filled with suspense and is very interesting. It makes you want to keep on reading! I hope there are more books like this. It's not too scary and it has the right amount of suspense."

"I really enjoyed it . . . A quick, easy, and enjoyable read . . . filled with teen life, high school drama and gossip, and the struggles of trying to survive day to day."

"The Missing's plot, a mystery that includes missing teenage girls, high school gossip, and a creepy step father, will appeal to middle and high school students. The lower reading level makes it accessible to reluctant and/or struggling readers."

"While there has been much discussion and focus on the plight of indigenous women in Canadian society recently, it is a work like Melanie Florence's The Missing that helps bring understanding and empathy to them...In short, a great piece of literature."

"Set against the backdrop of the plight of Aboriginal women in Canada and the general indifference of the local authorities, the book makes a compelling and heart-breaking case of the issue ... Narration is on-point and keeps you glued to the story. The story also touches the various problems faced by the teenagers, including the vicious rumor factory, life at foster care, molestation, racism, homosexuality, etc., highlighting the importance of a good, supportive family... The story is entertaining and with keep you engrossed."

"Melanie Florence's young adult novel The Missing reveals the world of missing girls and women in Winnipeg. It is a tragic issue that has been ignored for so long and by so many... The mystery of the young ladies' abductions and deaths is creatively written. The short chapters move quickly. The many twists and turns make The Missing a true page-turner. The author explores many social issues?prejudice, racism, sexual abuse, missing aboriginal children and women, foster care, social media and the flawed justice system. Every secondary school library information centre should have a copy of Melanie Florence's The Missing."

"Issues drive the plot (a subplot concerns homophobia aimed at one of Feather's friends) in this very brief contemporary novel, making for an informative, swift read."

Other titles by Melanie Florence