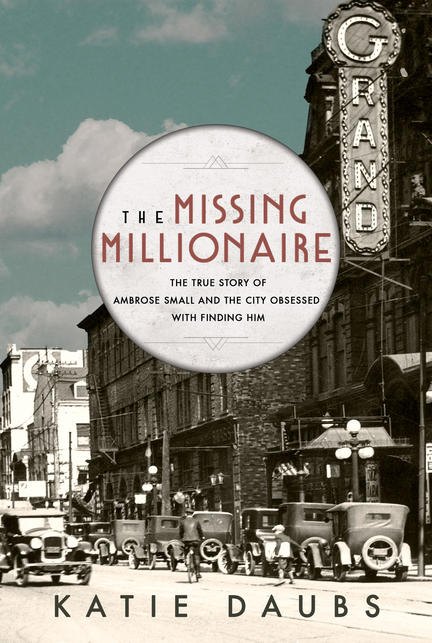 In December 1919, Ambrose Small, the mercurial owner of the Grand Opera House in Toronto, closed a deal to sell his network of Ontario theatres, deposited a million-dollar cheque in his bank account, and was never seen again. As weeks turned to years, the disappearance became the most "extraordinary unsolved mystery" of its time. Everything about the sensational case would be called into question in the decades to come, including the motivations of his inner circle, his enemies, and the police who followed the trail across the continent, looking for answers in asylums, theatres, and the Pacific Northwest.

In The Missing Millionaire, Katie Daubs tells the story of the Small mystery, weaving together a gripping narrative with the social and cultural history of a city undergoing immense change. Daubs examines the characters who were connected to the case as the century carried on: Ambrose's religious wife, Theresa; his long-time secretary, Jack Doughty; his two unmarried sisters, Florence and Gertrude; Patrick Sullivan, a lawless ex-policeman; and Austin Mitchell, an overwhelmed detective. A series of trials exposed Small’s tumultuous business and personal relationships, while allegations and confessions swirled. But as the main players in the Small mystery died, they took their secrets to the grave, and Ambrose Small would be forever missing.

Drawing on extensive research, newly discovered archival material, and her own interviews with the descendants of key figures, Katie Daubs offers a rich portrait of life in an evolving city in the early twentieth century. Delving into a crime story about the power of the elite, she vividly recounts the page-turning tale of a cold case that is truly stranger than fiction.

KATIE DAUBS is a reporter at the Toronto Star. She is a graduate of Carleton University. Born in Forest, Ontario, she lives in Toronto.

Excerpt: The Missing Millionaire: The True Story of Ambrose Small and the City Obsessed With Finding Him (by (author) Katie Daubs)

Ambrose Small’s city is still here in pieces. You can find his mansion on a leafy Rosedale street or walk by the trio of skyscrapers he knew so well at King and Yonge. In his day, they were a source of civic pride, among the tallest buildings in the British Empire, and they housed banks and railway offices. A century later, one is a hotel, while the other two are office towers filled with financiers and lawyers, with a mattress shop and pharmacy at street level. His theatre on Adelaide Street was torn down before the Depression, and now there is a glass banking tower in its place, a building so tall that no matter where you are, there it is, pointing to the spot where the story begins. The Grand Opera House.

Ambrose Small knew everyone had secrets. People might say they liked highbrow theatre, but he knew they’d be happy enough to sit in a dark room with a thousand strangers watch­ing a pair of likeable goofs singing ditties of the old country. As the ringmaster of one of Canada’s most powerful theatre networks—headquartered at the Grand Opera House—Small made his millions by catering to humanity’s desire for cheap escape. In 1919, when he was fifty-three years old, he sold it all for $1.75 million. The next day, he vanished from the theatre, never to be seen again.

The people who knew what that Toronto felt like, what it sounded and smelled like, are nearly all gone. The horse manure, coal dust, and factories have disappeared too, but the lilacs and chestnut trees bloom every spring, and the sewer pipes still snake below the ground, so ancient that they sometimes rupture, the past bubbling to the surface. But never Ambrose. Never the solu­tion to the mystery.

If he had been nicer, a theatre critic once said, maybe they would have looked harder for him. A hundred years have hardened the image of Ambrose Small into a vengeful, petty businessman—and he was that, certainly—but there are details buried in newspaper stories that make him seem more of a human being and less of a caricature. He had trouble sleeping. He had a hangnail problem.
Ambrose didn’t crave the spotlight like the actors on his stage. He built hidden rooms at his theatres, paid for indiscre­tions with secret accounts, refused to open his books when he was sued, and grew richer on backroom bets that left no trace.

“Katie Daubs’s spirited new book, The Missing Millionaire is less a lament for the unsolved mystery of a petty, philandering, Machiavellian middleman than it is a vivid social and physical portrait of rapidly evolving Toronto.”—The Globe and Mail

“This is an exceptional work of deeply researched historical non-fiction. Katie Daubs’s nimble storytelling takes us on a journey through Toronto’s often cantankerous past, uncovering forgotten details while bringing a century-old mystery and the characters involved vividly back to life. This book is an essential piece of Canadian history that will change the way you think of Toronto. And it’s all true.” —Shawn Micallef, author of Frontier City
“This tale of money, power and betrayal at the dawn of the Roaring Twenties has all the ingredients of a classic murder mystery: a reviled millionaire, a sudden disappearance, feuding families and plenty of suspects with a motive to lie or to kill. Richly detailed, tenaciously reported and engagingly written.” —Dean Jobb, author of Empire of Deception
“The Missing Millionaire is not only a lively and entertaining account of the unsolved mystery of theatre magnate Ambrose Small’s disappearance, it is a window into a century-old Toronto on the cusp of becoming a major metropolitan hub, and on how the pursuit of power and riches can lead so easily to ruin. Katie Daubs is a welcome addition to the narrative non-fiction landscape.” —Sarah Weinman, author of The Real Lolita
“If you like mysteries and a page-turning picture of early 20th-century Toronto, when Orange (Protestant) and Green (Catholic) were significant dividing lines, The Missing Millionaire is for you. Katie Daubs’s buoyant prose moved me through a cast of characters that runs the gamut from charming scoundrels to spiritualists, women of easy virtue and nuns. Toronto-the-Not-So-Good has never been more entertaining.” —Katherine Ashenburg, author of Sofie & Cecilia