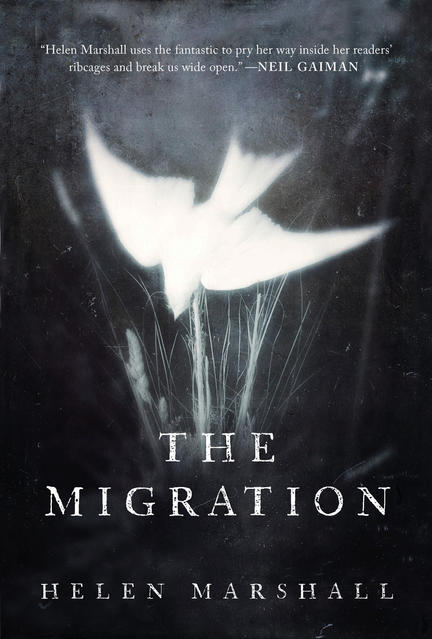 Finalist for the Sunburst Award for Excellence in Canadian Literature of the Fantastic
"A dark fable that somehow feels both timeless and urgently topical. The Migration is heart-wringing and powerful, but over and above that, it's just vivid and immersive and enthralling throughout." --M.R. Carey, author of The Girl with All the Gifts

When I was younger I didn't know a thing about death. I thought it meant stillness, a body gone limp. A marionette with its strings cut. Death was like a long vacation--a going away. Not this.

Storms and flooding are worsening around the world, and a mysterious immune disorder has begun to afflict the young. Sophie Perella is about to begin her senior year of high school in Toronto when her little sister, Kira, is diagnosed. Their parents' marriage falters under the strain, and Sophie's mother takes the girls to Oxford, England, to live with their Aunt Irene. An Oxford University professor and historical epidemiologist obsessed with relics of the Black Death, Irene works with a Centre that specializes in treating people with the illness. She is a friend to Sophie, and offers a window into a strange and ancient history of human plague and recovery. Sophie just wants to understand what's happening now; but as mortality rates climb, and reports emerge of bodily tremors in the deceased, it becomes clear there is nothing normal about this condition--and that the dead aren't staying dead. When Kira succumbs, Sophie faces an unimaginable choice: let go of the sister she knows, or take action to embrace something terrifying and new.
Tender and chilling, unsettling and hopeful, The Migration is a story of a young woman's dawning awareness of mortality and the power of the human heart to thrive in cataclysmic circumstances.

HELEN MARSHALL is the World Fantasy Award-winning author of two short story collections and two poetry chapbooks. Her stories and poetry have appeared in magazines and anthologies including Abyss & Apex, Lady Churchill's Rosebud Wristlet and Tor.com. She obtained a PhD from the Centre for Medieval Studies at the University of Toronto, and then spent two years completing a postdoctoral fellowship at the University of Oxford investigating literature written during the time of the Black Death. Helen has worked as a managing editor for ChiZine Publications, and was recently hired as a permanent Lecturer in Creative Writing and Publishing at Anglia Ruskin University in Cambridge. She grew up in Sarnia, Ontario, and now resides in Cambridge. The Migration is her first novel.

“Helen Marshall explores the latent wisdom and adaptability of the young in a . . . visionary fashion in her debut novel, The Migration. . . . A moving and genuinely original metaphor for the possibilities and perils of human transformation.” —James Grainger, author of The Long Slide, Toronto Star

"A moving study of love, family bonds, climate change and personal transformation. . . . Spectres of climate change and the plague haunt the novel, but what in lesser hands might have been a gloom-laden read is transformed by the author’s quiet optimism.” —The Guardian

“Helen Marshall’s debut novel offers a near future where climate change has produced massive flooding and spurred a mysterious sickness in children. . . . Although Marshall seems like she is setting up a zombie story (even Sophie compares the situation to a zombie plague at one point), she avoids that track completely and develops a more original, fantastical turn of events. This isn’t science fiction by a long shot, but Marshall offers the sheen of science, enough distorted suggestiveness to keep the story from drifting into fable.” —The Winnipeg Press

“It’s a thoughtful novel that places the love between two sisters at the center, and builds around it an intense sci-fi tale of disease and evolution. . . . Marshall skillfully builds a world only a step away from our own, delving into the parallels with previous periods of worldwide disease and chaos, and conjuring an all-too-realistic near future with a light touch.” —SFX Magazine

“In her debut novel, Marshall adapts [fable, dark fantasy, and myth] to a narrative that simultaneously flirts with dystopia and reckons with mortality. . . . Marshall is painting on a large canvas here and her style is unabashedly baroque: the novel is characterized by a high level of drama, intensity, and movement . . . [The Migration] proves ultimately optimistic about the ability of the human species to adapt to its circumstances.” —Quill & Quire

“This beautifully written fictional blend of biology, history, and the human heart is a clear-eyed, clean-limbed parable of change. Marshall’s close focus on the nature of emotional and physical metamorphosis becomes a blazing emblem of the transcendent power of hope.” —Nicola Griffith, author of the Light of the World trilogy

“A dark fable that somehow feels both timeless and urgently topical. The Migration is heart-wringing and powerful, but over and above that, it’s just vivid and immersive and enthralling throughout.” —M.R. Carey, author of The Girl with All the Gifts

“Intelligent, dark, wildly inventive, The Migration does more than put a new twist on the apocalyptic outbreak novel. It dares to be full of heart and full of difficult, defiant hope.” —Paul Tremblay, author of A Head Full of Ghosts and The Cabin at the End of the World

Other titles by Helen Marshall

Gifts for the One Who Comes After

Hair Side, Flesh Side