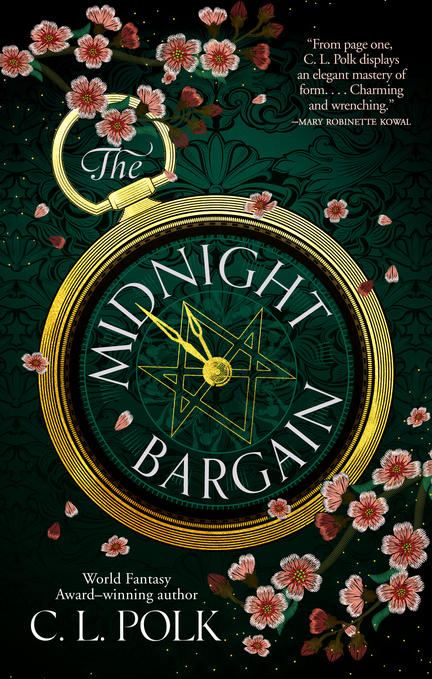 From the beloved World Fantasy Award-winning author of Witchmark comes a sweeping, romantic new fantasy set in a world reminiscent of Regency England, where women’s magic is taken from them when they marry. A sorceress must balance her desire to become the first great female magician against her duty to her family.

Beatrice Clayborn is a sorceress who practices magic in secret, terrified of the day she will be locked into a marital collar that will cut off her powers to protect her unborn children. She dreams of becoming a full-fledged Magus and pursuing magic as her calling as men do, but her family has staked everything to equip her for Bargaining Season, when young men and women of means descend upon the city to negotiate the best marriages. The Clayborns are in severe debt, and only she can save them, by securing an advantageous match before their creditors come calling.

In a stroke of luck, Beatrice finds a grimoire that contains the key to becoming a Magus, but before she can purchase it, a rival sorceress swindles the book right out of her hands. Beatrice summons a spirit to help her get it back, but her new ally exacts a price: Beatrice’s first kiss . . . with her adversary’s brother, the handsome, compassionate, and fabulously wealthy Ianthe Lavan.

The more Beatrice is entangled with the Lavan siblings, the harder her decision becomes: If she casts the spell to become a Magus, she will devastate her family and lose the only man to ever see her for who she is; but if she marries—even for love—she will sacrifice her magic, her identity, and her dreams. But how can she choose just one, knowing she will forever regret the path not taken?

C.L. Polk is the bestselling, World Fantasy Award-winning author of the critically acclaimed novels The Midnight Bargain and Witchmark, which was also nominated for the Nebula, Locus, Aurora, and Lambda Literary Awards. It was named one of the best books of 2018 according to NPR, Publishers Weekly, BuzzFeed, the Chicago Review, BookPage, and the B&N Sci-Fi and Fantasy Blog. They live in Alberta, Canada.

“The author’s penetrating social critique and deeply felt depiction of one woman’s struggle for self-determination are balanced by her charming take on classic Regency romance…. An expertly concocted mélange of sweet romance and sharp social commentary.” —Kirkus (starred review)

“Polk’s (Witchmark) foray into a society of magic and politics places the woman in the secondary role, but neither Beatrice nor Ysbeta will stay in place. Fans of romantic fantasy set in a multicultural world will find this a fascinating read.” —Library Journal (starred review)

“From page one, C. L. Polk displays an elegant mastery of form. The Midnight Bargain is by turns charming and wrenching.” —Mary Robinette Kowal­

“A rich banquet of a novel with vivid details, smart dialogue, and a cleverly unfolding examination of what it means to be denied the destiny you know you are meant for—and how to fight for change.” —Kate Elliott

“The Midnight Bargain is a delicious mix of forbidden magic and social ritual, with dangerous secrets, impossible choices, coded grimoires, and stolen kisses dressed up in a sensory feast of fancy carriages and corset stays. It’s Pride and Prejudice meets Jonathan Strange & Mr. Norrell, with two brilliant clandestine sorceresses up against the patriarchy!” —Melissa Caruso

“An absolute dream—at once sparkling and romantic, delightfully magical, and deeply thought-provoking. This book is a fantastical homage not only to the balls and matchmaking and strong-minded heroines of Regency romances, but the questions of gender, class, family obligation and personal ambition that lie at their beating heart.” —H. G. Parry

“I was utterly charmed.... It's the perfect blend of fantasy and romance.” —Kat Howard

“A sparkling, incisive, and razor-sharp fantasy of manners. A must read for anyone who loves stories where romance and fantasy meet.” —Tasha Suri

“Seamlessly blends Regency class issues, subversive intrigue, and fantasy together in a heart-racing seaside romance where everything hangs in the balance. Polk's magical elements are so integral to the romantic plot that the two are inextricable, much as all of the characters, from the leads to the seamstresses, now have a firm place in my heart.  I loved every intricate inch.” —Fran Wilde

“A subversive tale of magic and manners. I stayed up all night to finish this one.” —Ellen Klages

Other titles by C.L. Polk

Even Though I Knew the End