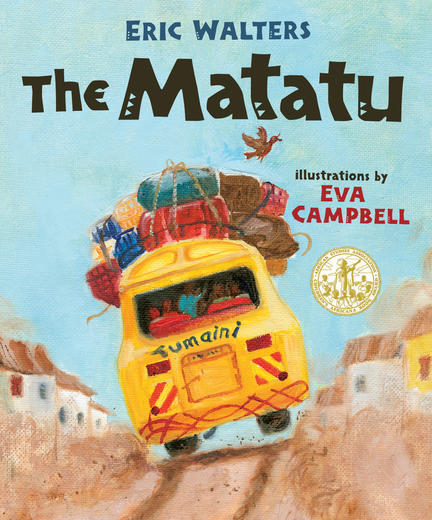 Do you know why dogs always chase after the matatus?

Kioko had been watching the matatus come and go for as long as he could remember. But today, for his fifth birthday, he climbs aboard one with his grandfather. As the matatu pulls away from the market, the village dogs chase after them. When Kioko asks his grandfather why the dogs always bark and chase after matatus, his grandfather tells him an entertaining tale about a dog, a goat and a sheep. Set in East Africa, The Matatu is a colorful story filled with many unexpected turns and twists along the way.

EVA CAMPBELL is an artist and illustrator who teaches visual art. She has exhibited her work in Canada, the US, the UK, Barbados and Ghana. Eva won the Children’s Africana Book Award for her illustrations in The Matatu by Eric Walters. She also illustrated Africville by Shauntay Grant, winner of the Marilyn Baillie Picture Book Award and the Lillian Shepherd Memorial Award for Excellence in Illustration, and a Governor General’s Literary Award finalist. Eva lives in Victoria.

The conductor picked his way down the aisle, collecting fares, making change and giving tickets.
"All the way to Machakos?" he asked Kioko's grandfather.
"Yes, to the end."
"Eighteen shillings for two."
"Eighteen?" his grandfather asked. "He is so small, you should only charge half the fare for him."
"He is small. If you want a cheaper fare, we can tie his feet together like the chickens and put him on the roof."
For a moment, Kioko thought they were serious, but then the men laughed.

"Both the folk tale and the love connection between Kioko and his grandfather are very appealing."

"Jump aboard the Matatu and hear the delightful tale of young Kioko's first journey on this rugged bus that transports villagers across the dirt roads of East Africa...Kioko's excitement and each animal's character come alive in the artwork of Ghanaian-born illustrator Eva Campbell. Her sense of colour and vibrancy authentically evoke the hustle and bustle of the Matatu journey, as well as Kioko’s childlike wonder at this new experience. This picture book stems from a folktale that author Eric Walters was told during a trip to Kenya. His experiences with the people of the Kamba tribe, and his extensive travels in Africa, contribute to making this story an authentic look into the life and stories of an African community."

"Walters, who runs an organization that helps Kenyan orphans, does an exemplary job of providing a cultural snapshot of Kioko's world. The affection between Kioko and his grandfather is effectively captured in Campbell's lively oil paintings, which also depict a dynamic, color-filled village and expressive villagers."

"Colorful, casual renderings of a village in Kenya surround the story of a boy's first bus ride with his grandfather...The" relaxed and accepting culture of the Kamba people is reflected in the story and in the folktale that Kioko's grandfather tells him on the way...Campbell is a perfect match to paint the setting for this African tale within a tale with the beautiful faces, arms, and hands of the bus riders. Especially for first and second grade story times, this book is recommended for all elementary school libraries."

"The illustrations...are as colorful and lively as an African village. There's no shortage of excitement when a matatu rumbles through, and Campbell captures that spirit perfectly. Though the story of the dogs, goats and sheep forms the center of this story, the real heart of the book is Kioko's relationship with his Babu. It's terrific to see the the esteem with which the other villagers treat Babu, and this and his wonderful stories add to Kioko's appreciation of all his grandfather is for him...The genuine respect Walters feels for the Kamba people is evident throughout, and Campbell's illustrations bolster that feeling, which will translate to readers as well. Just don't be surprised if your kiddos want to jump on a matatu themselves!"

"This tender story evokes the feeling of a grandfather and his grandson. The illustrations, too, transport the reader to East Africa. Children will love this story and will want to share it with their own grandparents."

"A colorful story filled with many unexpected turns and twists along the way."

"Campbell's oil paintings capture the bright colours and designs on the matatu...[Walters] expands on a Kenyan folktale that is sure to amuse children and adults."

"Campbell fills her oil paintings with bright colors and commotion, portraying her animals with trickster-like characteristics. Walters offers tender insight into a grandfather and grandson relationship, while depicting a unique cultural experience."

"Oil paintings provide realistic details of contemporary rural Kenya but include a few spreads in which the animals humorously take on anthropomorphic characteristics. The author's note, drawing upon his Kenyan experiences, will amuse adults...The love and respect shown between Kioko and his grandfather is both universal and sweetly evident."

"Campbell's illustrations effortlessly transport the reader to Kikima, Kenya. She evokes the richness of the Kenyan people and their culture by employing vivid colours and distinctive dress...The Matatu is both a beautiful and a light-hearted glimpse into the lives and stories of the Kenyan people. Walters expertly switches gears on the reader by turning a story of adventure into one of hilarity. However, The Matatu is not merely a folktale. Walters has also crafted a story that exemplifies the grandparent-grandchild relationship."

"The enjoyable view of life in this faraway country beautifully frames a universal special relationship between a child and a grandparent. Children and adults will smile at Kioko's concluding action in response to his grandfather's tale."

"With a wry mix of realism and folklore, Walters draws on his work in rural Kenya to tell the story of Kioko...Campbell’s bright, mischievous watercolors show the passengers on the crowded seats with the conductor picking his way down the aisle collecting fares, along with close-up images of Kioko as he listens to his beloved grandpa tell a story while they drive through dusty roads past huts, houses, and market stalls. Along with the vivid setting, there is a playful story based on a Kamba folktale...The bond between Kioko and his grandpa will grab kids, and so will the sly twist when the boy tries to fix things and change the old folktale."

Kioko had been watching the matatus come and go for as long as he could remember. But today, for his fifth birthday, he climbs aboard one with his grandfather. As the matatu pulls away from the market, the village dogs chase after them. When Kioko asks his grandfather why the dogs always bark and chase after matatus, his grandfather tells him an entertaining tale about a dog, a goat and a sheep.

The Matatu is Eric Walter’s retelling of a Kenyan folktale about a bus that picks up people as it travels from town to town. Filled with bright illustrations and an engaging sense of humour, teachers can use this book to teach math as well as communication skills. Learning can also extend to social studies (cultural practices) and social skills (listening, sharing and communicating). Drama experiences such as retelling the story in role, creating tableaux images, or dramatizing the story can be drawn from a reading of this folktale.

Other titles by Eva Campbell

Two Drops of Brown in a Cloud of White