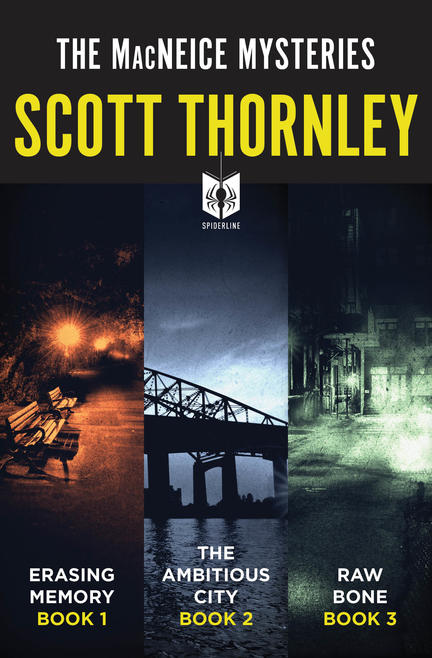 An exclusive bundle of the first three books in the critically acclaimed MacNeice Mysteries series.

In Erasing Memory, Detective Superintendent MacNeice is called to a crime scene of singular and disturbing beauty. A young woman in evening dress lies gracefully posed on the floor of a pristine summer cottage so that the finger of one hand regularly interrupts the needle arm of a phonograph playing Schubert’s Piano Trio. The only visible mark on her is the bruise under her chin, which MacNeice recognizes: it is the mark that distinguishes dedicated violinists, the same mark that once graced his wife. The murder is both ingenious and horrific, and soon entangles MacNeice and his team in Eastern Europe’s ancient grievances…

The Ambitious City, the gripping second installment, reads like a crossover episode between Sons of Anarchy and Dexter, as Detective Superintendent MacNeice and his team face off against a gang of violent bikers and a bloodthirsty serial killer targeting the city’s successful young women of colour.

In Raw Bone, Detective Superintendent MacNeice and his team are called in to investigate the two seemingly unrelated crimes, and quickly find themselves venturing into the dive bars and rooming houses of Dundurn, where Irish immigrants rub elbows with mercenaries and the city’s criminal underclass.

SCOTT THORNLEY grew up in Hamilton, Ontario, which inspired his fictional Dundurn. He is the author of five novels in the critically acclaimed MacNeice Mysteries series: Erasing Memory, The Ambitious City, Raw Bone, Vantage Point, and Middlemen. He was appointed to the Royal Canadian Academy of the Arts in 1990. In 2018, he was named a Member of the Order of Canada. Thornley divides his time between Toronto and the southwest of France.

Other titles by Scott Thornley