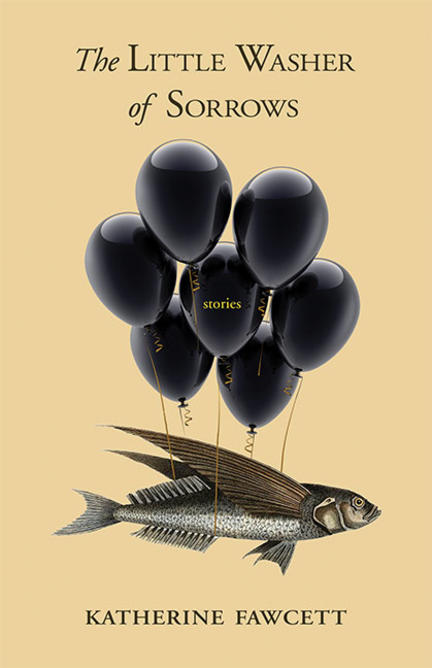 The Little Washer of Sorrows is a collection of short stories that explores what happens when the expected and usual are replaced with elements of the rare and strange. The book's emotional impact is created with strong, richly drawn characters facing universal issues, but in unusual settings. The collection is both dark and comical with engaging plot twists and elements of the macabre as characters attempt to cope with high-stakes melodramas that drift further out of their control. The threat of something sinister lingers beneath the surface in many of Fawcett's stories, as she explores the messy "what ifs?" of life and the ever-present paradox of free will.

Katherine Fawcett was born in Montreal, raised in Calgary, has lived in Japan, and now calls the small town of Pemberton, British Columbia home. She started her writing career as a sports reporter before venturing into freelance journalism and commercial writing. After becoming a mother and turning forty, Katherine could no longer ignore her tendency to dance fancy jigs on the boundary between real and imagined and has since turned her hand to fiction. She teaches music in Whistler, BC, and plays fiddle in a band called The Wild Irises. Her short fiction has been published in Wordworks, Event, Freefall, subTerrain, and Other Voices, and her plays have been performed by several community theatre groups.

Excerpt: The Little Washer of Sorrows: and Other Stories (by (author) Katherine Fawcett)

Lenny learned of Helen's hormonal issues when she accidentally texted him instead of Kirsten.
Still no period and fucking hot flash again. This is insane! I'm only 33!!!! 2 young 4 menopause.
Then: Oops, wrong person. Disregard.
U cant untext your husband. U ok?
She didn't reply.
That night in bed, he brought it up again. "Listen. About the period thing. Do you think you're pregnant?"
"No, dipshit," she said, still facing the wall. "I'm not pregnant."
"Then what is it? What's going on? Do you think you're eating too much of that salmon roe? Maybe that's affecting things. You know. In the female department."
She hoisted herself up on her elbows, misted her face with the saline spray she kept on the night table, then squinted at him. "I don't know if you've noticed, Lenny, but something is wrong with me. My vagina is drying up. And shrinking. My period stopped two months ago. My legs and feet hurt all the time. Sometimes I feel like my throat is closing. My skin is all weird. I'm losing weight and I'm scared."
Lenny felt terrible. He hated seeing her suffer, but he knew exactly what was going on. He raised his hand to touch her cheek and couldn't help wondering if her eyes had always been that far apart or if it was just his imagination. It wasn't as if he didn't care that his wife was becoming aquatic. But what could he do? What could he say?
"Maybe you should see a gynecologist."
She burst into tears and a bubble came out of her mouth.

"Funny and compassionate, this collection of stories leaves you with an understanding of our humanness - foibles, beauty, warts and all." - Stella Harvey, author of Nicolai's Daughters

"Katherine Fawcett works magic here, whips imagination, wit and anarchy into gold. Each story finds a place where our culture is already strange and jumps off from there. " - Fred Stenson

"Katherine Fawcett's unique, fast-paced, witty, hits-you-in-the-gut funny short stories appeal to some of our deepest fantasies and darkest questions, such as 'what happens to us after we die?' and 'what if I could create my ideal mate?' Like a magician, Fawcett uses language to create illusion and to reveal truth in a most engaging way."- Sue Oakey

"Katherine Fawcett inhabits a bizarre back-alley of carnies and pyramid schemes, daily affirmations, making-do and derring-do: a Diane Arbus world of freaks and fables that is at once hilarious, surprising, and profound, turning our view of the place we live in upside down. . . Oddball, yet strangely familiar, the creatures spawned in Fawcett's imagination will move into yours. You'll never be the same again." -Merilyn Simonds

"Fawcett's stories turn left just when you think they'll turn right; they step on the gas and race deep into the heart of her characters' bizarre lives." - Stephen Vogler

Other titles by Katherine Fawcett