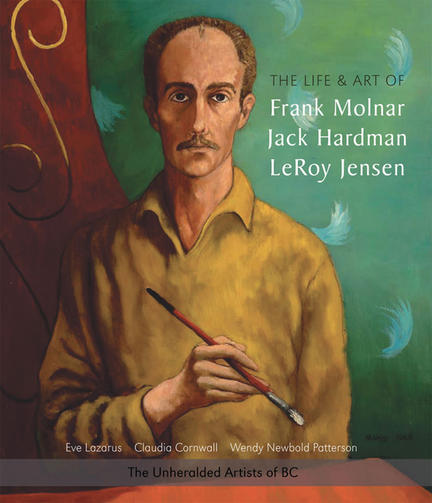 Three BC. artist-mentors who worked and exhibited in the 50s-60s in Vancouver.

Frank Molnar (1936-) fled from Budapest during the Hungarian Revolution and went to the USA where he studied art at the Pennsylvania Academy of Fine Arts. In 1962 he headed for Vancouver to forge his artistic destiny as painter. In 1969 he became one of the first art teachers at Capilano College.

Jack Hardman (1923-1996) was born in New Westminster and studied art in Western Washington and at UBC. He married BC poet Marya Fiamengo in the 50s. A sculptor and a printmaker, he was the Director of the Burnaby Art Gallery.

LeRoy Jensen (1927-2005) spent his childhood in China, Japan and Vancouver and studied painting under the French cubist Andre L'Hote in Paris. In 1954 he returned to Vancouver. He was a founding member of Greenpeace and a member of Victoria's Limner group. He lived on Salt Spring Island. Introduction by Max Wyman.

Eve Lazarus has worked as a freelance journalist and writer for more than 15 years. Originally from Australia, she is the Vancouver correspondent for Marketing Magazine and the author of Frommer's with Kids Vancouver 2001 (John Wiley & Sons). She is a former newspaper reporter and has written for a variety of periodicals in Canada and the United States including the Globe & Mail, the Vancouver Sun, Style at Home, B.C. Business and Canadian Family magazines. In 2001, she won gold and silver awards at the Canadian Business Press KRW's. Lazarus has a communications degree from Simon Fraser University and a journalism diploma from Langara College. Since becoming obsessed with home histories, she has written articles on the subject for Style at Home; REM; the Globe & Mail, and Nuvo Magazine. Eve lives in North Vancouver with her husband, three kids and miniature Schnauzer.

Claudia Cornwall is a freelance writer for over 20 years, has written two books. The second one, Letter from Vienna: A Daughter Uncovers her Family’s Jewish Past, won the BC Book Prize for best non-fiction in 1996. She has been published in many Canadian magazines and newspapers including The Globe & Mail, Reader's Digest, (the Canadian, the international and the Mainland China editions), BC Business, as well as the on-line magazine, Tyee. She teaches courses about ethical and legal issues for writers as well as courses in memoir writing at SFU and Douglas College. In March 2009, she received a $20,000 journalism award from the Canadian Institutes of Health Research to support the writing of a series of stories about health research. Claudia Cornwall grew up in Vancouver and studied philosophy at UBC and the University of Calgary. She is married and has a son and a daughter and lives in North Vancouver.

Wendy Newbold Patterson attended the University of Colorado and completed her Bachelor of Arts at Vermont College. In 1970 she was a student of LeRoy Jensen's at the Free University of Vancouver. A painter, she lives in Gray, Maine with her husband, a sculptor. Her work is in several private collections in North America.

Other titles by Eve Lazarus

Searching for the City's Hidden History

An Astonishing True Story of Adultery, Arsenic, and a Charismatic Killer

The City's Most Baffling Unsolved Murders

At Home with History

Other titles by Claudia Cornwall

Stories from a Blazing Summer

At the World’s Edge