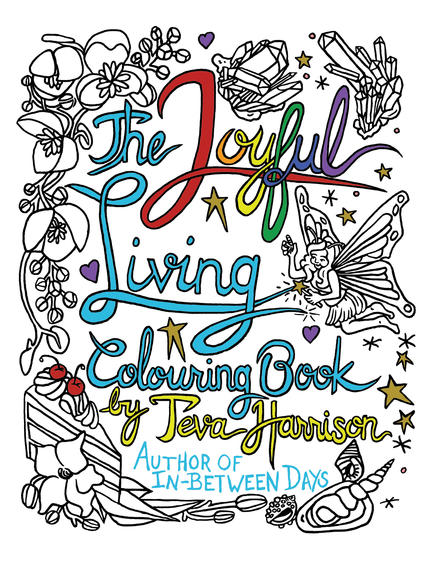 From the author and illustrator of the critically acclaimed graphic memoir In-Between Days comes a splendid new colouring book of original new illustrations with a few choice words of hope that will inspire and delight.

When Teva Harrison was first diagnosed with cancer, she felt lost, cast adrift. In order to pull herself out of depression, to draw herself forward, she started to draw. In the beginning, the drawings were tiny wildflowers photographed on her travels. Something about that act of looking, drawing the edges until flowers emerged, focusing on something so short-lived, resilient, and beautiful changed the nature of her days. It let the joy back in. This colouring book is an expansion on that germ of hope. Having cancer has made the world feel especially precious to Harrison, and she finds magic and delight everywhere: symbol-enriched heraldry, animals and birds, everyday objects that give her pleasure, foliage and flowers, and a few choice words of inspiration and hope.

TEVA HARRISON is a writer and visual artist. She is the author of the critically acclaimed graphic memoir In-Between Days, which was the winner of the Kobo Emerging Writer Prize for Nonfiction, a finalist for the Governor General’s Literary Award for Nonfiction and the Joe Shuster Award for Cartoonist or Auteur, and was a Globe and Mail, National Post, Kobo, and Quill & Quire Book of the Year. Forty-five works from In-Between Days have been exhibited in a solo show at the Winnipeg Art Gallery. Teva is Principal Illustrator for the National Film Board/National Theatre production of playwright Jordan Tannahill’s Draw Me Close: A Memoir, a virtual reality theatrical experience blending live theatre and virtual reality technology.

She is a Canadian Magazine Award and National Magazine Award finalist, whose writing and comics have appeared in The Walrus, Granta, Quill & Quire, Huffington Post, Carte Blanche, Reader’s Digest (Canada, U.S., and International editions), Globe and Mail, and more. She is a commentator on CBC Radio, in the Toronto Star, and in the Globe and Mail, and has appeared on programs, including Canada AM, The Agenda with Steve Paikin, Space TV’s InnerSpace, The Morning Show, and in Maclean’s, Chatelaine, and Rabble.ca. Teva regularly speaks on creativity and leads workshops on telling life stories. She is also the illustrator of The Joyful Living Colouring Book. Born and raised in rural Oregon, Teva currently lives in Toronto with her husband.