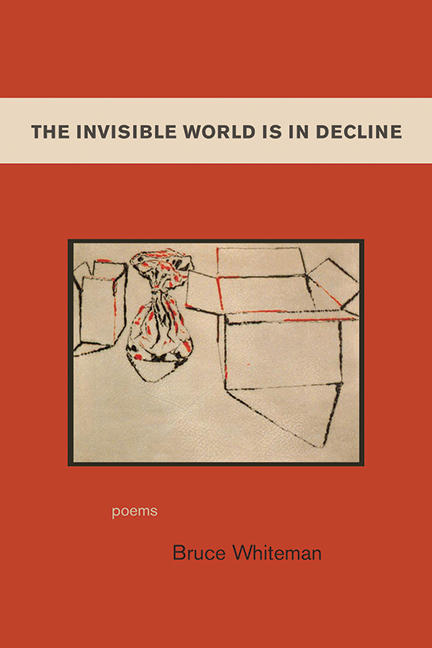 The Invisible World Is In Decline pays homage to earlier writers of both the long poem and the impersonal love lyric: Coleridge, Lautréamont, Spicer, and Zukofsky. Responsive to the everyday, the particular, and to the body, Whiteman explores the grand ways in which poetry has come to shape language and experience in the last century. The prose poem form allows for images and music to sometimes predominate over shape and sense in what poet Robert Creeley once called “a wild exultation.” In the end, it moves towards a human paradise where love, thought, and language are in perfect attunement, and where poetry can say so.

Bruce Whiteman is a Canadian poet and writer living in Los Angeles. He is the author of many books of poetry, including Visible Stars: New and Selected Poems (1995), Tristia, and XXIV Love Poems (2002). He regularly writes reviews for Canadian and American journals, and his scholarly books include Lasting Impressions: A Short History of English Publishing in Quebec (1994) and J.E.H. Macdonald (1995).

Other titles by Bruce Whiteman

The Invisible World Is in Decline Book IX

The Invisible World Is in Decline, Book VII

A Short History of English Publishing in Quebec

Raymond Souster and His Works