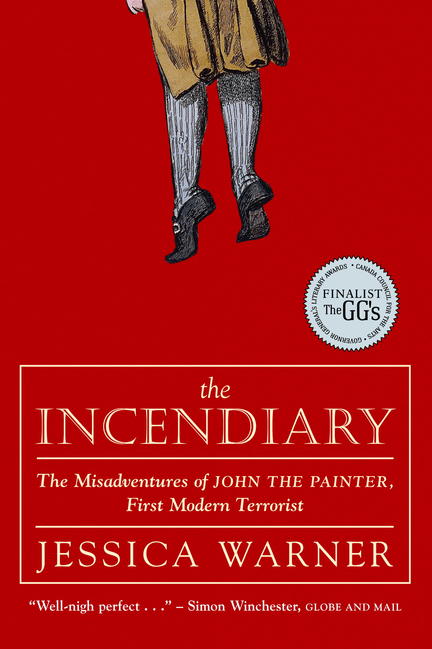 In 1776 and 1777, during the American Revolution, a young Scot known only as John the Painter took his war to England by committing acts of terror in the dockyards of the mighty British navy.

This is the first full-length biography of that brilliant but disturbed young man. His story offers chilling parallels to the present – and insights into why certain young men are driven to commit unspeakable crimes. Warner has written a book of history that reads like a picaresque novel, but always with a modern twist. Its hero travels to France and receives the blessing of the American envoy there. King George III offers a reward for his capture. Bow Street Runners are sent out inpursuit. Newspapers print sensational stories. A bill to suspend habeas corpus is rushed through Parliament and American privateers – the unlawful combatants of their day – are held without being charged. The Incendiary takes readers on a fascinating journey from Europe to colonial America and finally to the gallows at Portsmouth.

In this atmospheric and deftly researched tale of a young man who tried to bring down a superpower, Warner has crafted a popular history with contemporary implications.

Jessica Warner is a research scientist at the Centre for Addiction and Mental Health in Toronto and teaches in the graduate faculty of the department of history at the University of Toronto. She is the author of the critically acclaimed Craze: Gin and Debauchery in an Age of Reason.

Excerpt: The Incendiary: The Misadventures Of John The Painter, First Modern Terrorist (by (author) Jessica Warner)

The fact is that we do not know why Aitken became passionately pro-American. There was no inkling of this during his days in America. The timing of the revolution was as big a factor as any, with the war becoming news in England just as Aitken’s life had hit rock bottom. Even so, he was not an immediate convert. The war had already started by the time he returned in 1775, and for several months, he wandered aimlessly, becoming more reckless with each passing week. This much is clear: before he embraced the American Revolution, his wanderings had no purpose; after he embraced it, they did.

At some point, presumably toward the end of 1775, his thinking progressed from favoring the American Revolution to wanting to play a part in it. This was a step that other British radicals, Price included, were not willing to take. It did not occur to Aitken that he might be able to do something on his side of the Atlantic until he overheard an otherwise innocent conversation. “It is amazing with what force this conversation kept possession of my mind,” he was later quoted as saying. “I believe it never left me afterwards.”

The circumstances were harmless enough. Several men were gathered in a public house in Oxford, talking about the war. Aitken hung on their every word. The Royal Navy, they all agreed, depended on the royal dockyards; take away these, and the war was as good as lost.41 The conversation’s effect on Aitken was electrifying. It was then and there that he set himself the task of hobbling the Royal Navy by destroying the dockyards that kept it afloat.

It was an ambitious undertaking, especially for just one man. But therein lay its appeal. It gave him a challenge. The destruction of just one dockyard would prove an enormous undertaking, one that would use all his talents. The skills that he would employ were the skills that he already had, starting with the two things he had learned as an apprentice: how to draw and how to grind colors and mix paints. He would use the first in making elaborate sketches of his targets, along with designs for incendiary devices, and he would use the second in manufacturing his own combustibles. He was forever grinding unlikely substances, often prevailing on unsuspecting painters to lend him their stones. His background as a painter probably explains why he favored turpentine over other combustibles. The skills that he had acquired as a burglar would also serve him well, allowing him to move about without drawing attention to himself, slipping in and out of buildings and storehouses. It helped, too, that he was the sort of man whom nobody seemed to notice anyway.

His expectations soon acquired a life of their own, and he started to become slightly unhinged. He relived the same scenario, again and again: with the dockyards destroyed, America would win the war by default, and he would return there an officer and a hero. The indignities, obscurity and crushing commonness of his past life would all be behind him.

There was a caveat. Although he desperately wanted fame, he did not want to work too hard or long to achieve it. In this we can detect the impatience and impulsiveness of a very young man. From this perspective, he had come up with just the right project. It was nothing if not economical of his time, with ten months all told for gathering information, and perhaps two months, if everything fell into place, for burning down each of the major dockyards: Portsmouth in the southwest, Plymouth in the west, and Chatham, Woolwich, and Deptford outside London.

“A fine story about an eccentric subject… The Incendiary is an accomplished balance between research and storytelling, fact finding and original thought, and pays an immense tribute to its poor, peculiar subject.”
–Quill & Quire’s

“Jessica Warner's John the Painter shows you just how good history can get: a tour de force of original thinking; deep immersion in a lost world (or in this case, underworld); prodigious empathy with its hapless anti-hero and exhilarating, knife-sharp writing that concedes nothing to fiction writers at the top of their game. Don't be fooled by its modest size and ostensibly eccentric subject; this is rich, ambitious history, executed in literary fireworks: a small glory and a joy to read.”
–Simon Schama

“This is a fascinating tale of a bizarre incident of the American Revolution. George the Third’s England, it seems, was as susceptible to terror panic as George Bush’s twenty-first-century America. Jessica Warner writes history carefully and well.”
–Russell Baker, Pulitzer-winner, author or editor of seventeen books

“Jessica Warner spins a riveting tale of the night side of the American Revolution: the story of the poor, ambitious, unscrupulous, unlucky man who tried to decapitate the British war machine.”
–Richard Brookhiser, author of America's First Dynasty: The Adamses, 1735-1918, Gentleman Revolutionary: Gouverneur Morris, the Rake Who Wrote the Constitution and Alexander Hamilton, American

Other titles by Jessica Warner

A Short History of Abstinence in America