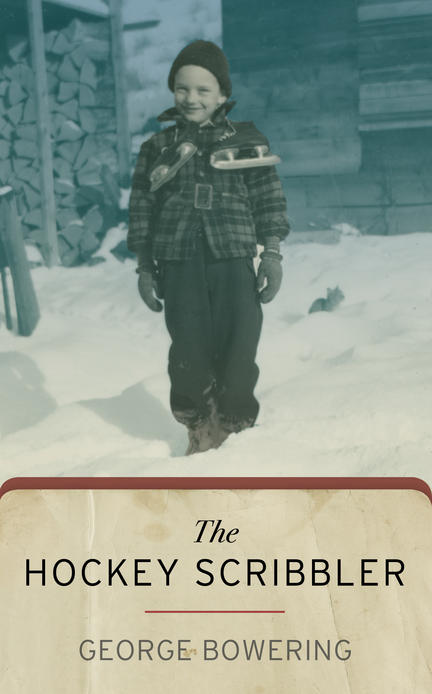 Hockey forms the backdrop of our lives. For many Canadians, the big moments — births, deaths, marriages, moves — are all mixed up with the wins and losses of our teams. The voices of Hockey Night in Canada sportscasters are our soundtrack, and visions of skates scraping across the ice lull us to sleep.

George Bowering, Canada’s former poet laureate, is no different. Growing up in Oliver, B.C., Bowering was entranced by the kids from Saskatchewan who skated and handled pucks as easily as breathing. His fascination with hockey followed him into adult life, from B.C. to Quebec and back again. Bowering followed his teams with a critical eye and a fan’s passion, and his stories bring us on a cross-country hockey-themed road trip, with occasional forays into boxing, poetry, and sports fashion.

Bowering has an encyclopedic knowledge of his subject. He has been an avid and attentive hockey fan since boyhood, and has an extensive catalogue of thoughts and opinions on the personalities and events that populate Canadian hockey history. In The Hockey Scribbler, Bowering brings us along on his richly detailed look back at hockey in Canada since the 1950s.

George Bowering
George Bowering, Canada’s first Poet Laureate and co-founder of the avant-garde poetry magazine TISH, was born in the Okanagan Valley.
A distinguished novelist, poet, editor, professor, historian and tireless supporter of fellow writers, Bowering has authored more than eighty books, including works of poetry, fiction, autobiography, biography and youth fiction.
In 2002, Bowering was recognized by the Vancouver Sun as one of the most influential people in British Columbia.
In 2011, he received the Lieutenant Governor’s Award for Literary Excellence in British Columbia.

“Its structure is dictated by [Bowering’s] episodic yet abiding fascination with displays of puck skills. So it’s not an all-encompassing account of Bowering’s life; rather, it’s a nicely crafted rummage sale of select hockey memories . . . The Hockey Scribbler is a literate yet plain-spoken homage to the game Bowering has loved and followed since childhood.” — Winnipeg Free Press

“The Hockey Scribbler is a must read for every Canadian who grew up loving the game.” — Owen Sound Sun Times

“It is a pleasure to experience such a gifted author sharing his thoughts on hockey as only he can. I couldn't put the book down, which is a rare thing to say for most hockey books.” — GreatestHockeyLegends.com

Other titles by George Bowering

a start to the day from famous English-language poets

if wants to be the same as is