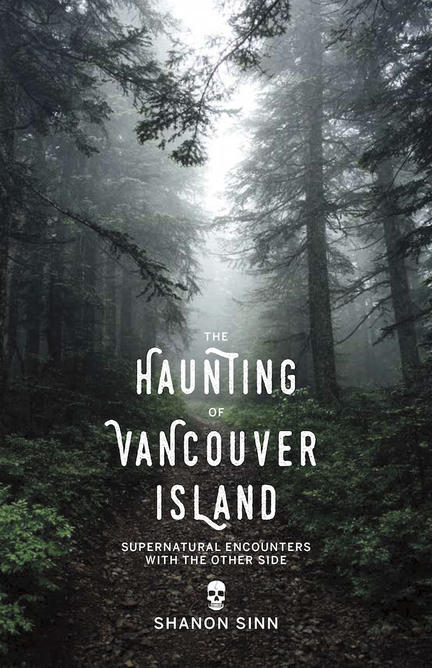 A compelling investigation into supernatural events and local lore on Vancouver Island.

Vancouver Island is known worldwide for its arresting natural beauty, but those who live here know that it is also imbued with a palpable supernatural energy. Researcher Shanon Sinn found his curiosity piqued by stories of mysterious sightings on the island—ghosts, sasquatches, sea serpents—but he was disappointed in the sensational and sometimes disrespectful way they were being retold or revised. Acting on his desire to transform these stories from unsubstantiated gossip to thoroughly researched accounts, Sinn uncovered fascinating details, identified historical inconsistencies, and now retells these encounters as accurately as possible.

Investigating 25 spellbinding tales that wind their way from the south end of the island to the north, Sinn explored hauntings in cities, in the forest, and on isolated logging roads. In addition to visiting castles, inns, and cemeteries, he followed the trail of spirits glimpsed on mountaintops, beaches, and water, and visited Heriot Bay Inn on Quadra Island and the Schooner Restaurant in Tofino to personally scrutinize reports of hauntings. Featuring First Nations stories from each of the three Indigenous groups who call Vancouver Island home—the Coast Salish, the Nuu-chah-nulth, and the Kwakwaka’wakw—the book includes an interview with Hereditary Chief James Swan of Ahousaht.

Shanon Sinn is a member of British Columbia Ghosts & Hauntings Research Society (BCGHRS), Paranormal Studies and Inquiries Canada (PSICAN), and he researches folklore and hauntings from a journalistic perspective. Sinn is also an infantry veteran, aspiring photographer, forager, and stand-up paddle boarder. He is currently enrolled in the Vancouver Island University Creative Writing Program, and was recently awarded the Barry Broadfoot Award for Journalism. Find out more about him at ShanonSinn.com.

"Sinn offers a grounded approach to understanding how the folklore developed. He is also out to bust some myths. That is, to distinguish fact from fiction and not be afraid to hurt some feelings along the way."

"I really encourage everyone to pick up the book. There are a lot of great stories, a lot of great history, and again, things you're just not going to find anywhere . . . it's all really fascinating."

"Sinn starts each chapter with a moody and poetic paragraph – one that whisks the reader straight into another eerie dimension altogether. It is here that the writing becomes enthralling; it is as though Sinn knows something that the rest of us do not. The reader is pulled into the unsettling scene, and left there to wonder. It’s both chilling . . . and wonderful." —Carol Anne Shaw, The Ormsby Review

Does a headless woman haunt Mt. Sicker? The Cowichan Valley Citizen gets the scoop from Shanon Sinn.