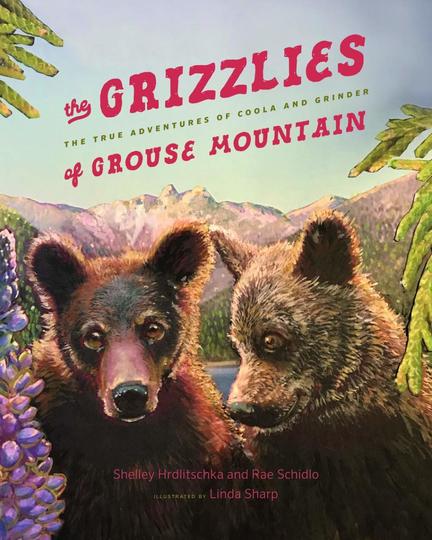 Coola and Grinder are two adult grizzly bears living at the “peak of Vancouver” on Grouse Mountain. For the past eighteen years they have been among the mountain’s biggest attractions. People from all over the world flock to see these magnificent creatures, who live in a five-acre wildlife refuge that simulates a grizzly bear’s natural habitat. Contrary to popular belief, the bears are not brothers; they were brought to the mountain as orphaned cubs born on opposite sides of the province—Coola hails from Bella Coola, and Grinder (named after the Grouse Grind hiking trail) was born near Invermere.

The Grizzlies of Grouse Mountain tells the heartwarming and inspiring tale of Coola and Grinder’s life on the mountain, their distinct personalities, and their important role in teaching wildlife rangers and scientists about grizzly bear behaviour. Written for young school-age children, this book presents facts and entertaining anecdotes about the bears in a clear and engaging way, and imparts valuable lessons about the importance of wildlife conservation. This richly illustrated book will foster children’s love of wildlife for years to come.

Shelley Hrdlitschka discovered her love for children's literature while teaching school. She decided to try writing her own books, and is now the award-winning author of nine novels for teens, all published by Orca Book Publishers.

Shelley offers school and library presentations on the value of perseverance. She describes the pitfalls she encountered on her path to becoming a published author and discusses where ideas come from using examples from her books. She touches on numerous literary devices, tailored to the age of the audience. Shelley also reads from some of her many rejection letters-the part of the presentation that students seem to like most. She is also available for writing workshops.

Shelley lives in North Vancouver, British Columbia, with her three daughters and an assortment of animals. When she's not writing, she can be found hiking, snowshoeing, practicing yoga or hidden away with a book and some good music. More information can be found at http://shelleyhrdlitschka.wordpress.com.

Born and raised in Saskatchewan, Rae Schidlo is a retired teacher who loves the outdoors, animals, hiking, cycling, swimming, gardening, reading, line dancing, and volunteering at the Grouse Mountain Wildlife Refuge. She was inspired to write this book while volunteering with Grinder and Coola and getting to know their distinct personalities.

"An excellent introduction to the lives of grizzly bears." —Canadian Children's Book News

"Steers away from being sensational and focuses instead on motivating young readers to be interested in the welfare of grizzlies." —BC BookWorld

". . . offers many facts about grizzlies — their diet and hibernation routines, explanations of the differences between the two bears (one is a coastal species, the other from the interior). Websites provide links to more information about bears and animal conservation, and also to the webcams on Grouse." —BC Books for BC Schools

". . . will be a hit with young readers who have an interest in wildlife." —Resource Links

“Through this inspiring story, we have a rare opportunity to learn more about the orphaned grizzly bears of Grouse Mountain and to develop a deeper understanding of their life and habits. Rich illustrations and a touching narrative make this book a wonderful resource for any young reader.” —Deborah Hodge, author of West Coast Wild

Other titles by Shelley Hrdlitschka

Dancing in the Rain