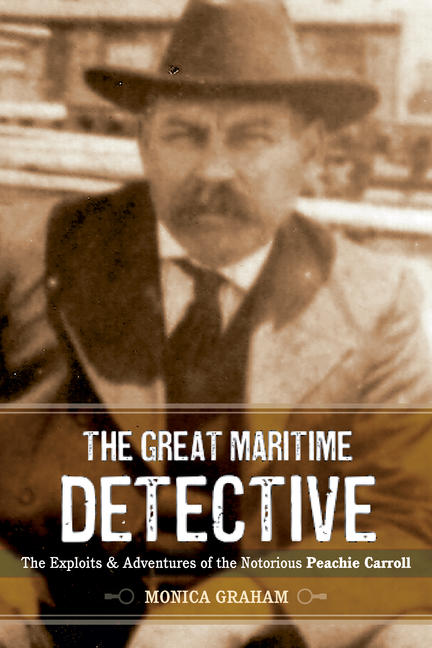 He was a sailor a miner, a bounty hunter, a prospector, a ghost hunter, and a railway guard, just to name a few. Whether sinner or saint, Peter Owen Carroll, a.k.a. Peachie Carroll, is best remembered as the infamous Maritime police detective of the late nineteenth and early twentieth centuries.
Although his methods were sometimes unscrupulous, and he was often considered a mercenary, Peachie Carroll was a formidable investigator. Peachie was fired, re-hired, and quit many times, but as a police officer Peachie solved some of the Maritimes' best-known crimes, such as the murder of Moncton police officer Joseph E. Stedman. He arrested moonshine-makers and embezzlers, petty thieves, rum-runners, bank robbers, and murderers. In 1896, Peachie gained fame again, solving the New Brunswick murders of Eliza Dutcher and her son.

In The Great Maritime Detective, author Monica Graham profiles this long-standing hero of Pictou County and one of the region's ultimate characters.

Monica Graham is a freelance writer for newspapers and magazines across the country, including the Halifax Chronicle Herald. A member of the Writers’ Federation of Nova Scotia and the Writers in the Schools program, she is the author of Bluenose, The Great Maritime Detective, and The Historic Town of Pictou. Monica lives near Pictou, Nova Scotia.

Other titles by Monica Graham

Navigating the Challenges of Caring for Mom

An Illustrated History of New Glasgow and area

Stories of Our Past