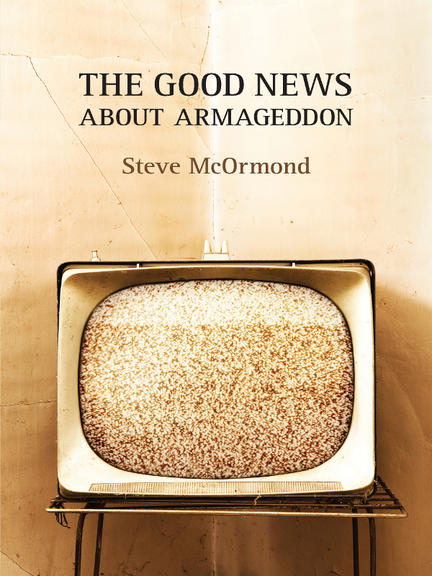 Poems that occupy the difficult territory of contemporary crisis with great candour and trenchant wit.

Steve McOrmond’s unflinching take on contemporary life, with its saturnine candour and ironic focus, may remind readers of the anti-poetry of Europeans like Zbigniew Herbert: intense, humanistic and deeply sceptical of inflationary gestures or stagy rhetoric. Shedding illusions, but equally refusing the consolations of despair, McOrmond’s well-tempered satire is carried home on its own crisp music.

The title poem has, as it narrative background, the encounter between the narrator and a young door-to-door missionary, one who sets his worldly and jaded scepticism against her innocence and faith. The Good News about Armageddon poses questions that are difficult and durable (“In these hours of prolific / doubt, how will we acquit ourselves?”), as well as those that are topical (“Are Paris Hilton’s 15 minutes over yet?”) and probes with accurate wit (“We are an argument / for unintelligent design”). This is essential poetry for our time – astute, informed, bitingly satirical, yet grounded in its quest for words that, like Cordelia’s, reverb no hollowness.

Steve McOrmond is the author of three previous collections of poetry, most recently The Good News About Armageddon (Brick Books, 2010), which appeared on a number of book critics' Best of 2010 lists and was shortlisted for the 2011 ReLit Award. His second collection, Primer on the Hereafter (Wolsak and Wynn, 2006), was awarded the Atlantic Poetry Prize. His debut collection, Lean Days (Wolsak and Wynn, 2004), was shortlisted for the Gerald Lampert Award. Originally from Prince Edward Island, he lives in Toronto.

Other titles by Steve McOrmond

Primer on the Hereafter