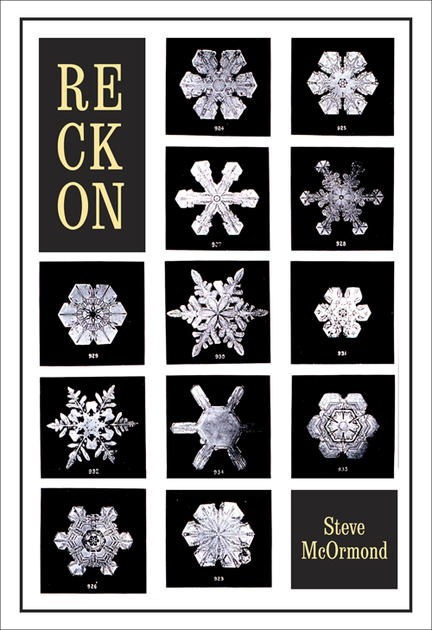 Anxious, twitchy, urgent poems — a collection that's at once sardonic and "chronically wishful."

Reckon, Steve McOrmond's first book of poems since his acclaimed 2010 collection The Good News about Armageddon, hones in on those fugitive moments when the parts of ourselves that have not been entirely subsumed by consumer capitalism escape their cages and come out to play — a photographer's lifelong desire to collect snowflakes, an adolescent's game of show-me-yours, the small, defiant act of letting a cellphone call go to voicemail. "The whole world has gone straight to voicemail," McOrmond writes a line later.

With one foot in the physical world and one in the virtual, these poems embody the often-tense negotiations between "I" and a collective "we." Concerned with the sweep of history and the rush of the now, McOrmond demonstrates a knack for bringing the vast and amorphous down to human size, making it personal: "How gone? Real gone. All our gift cards unredeemed."

Responding to a poem from Reckon that appeared on Poetry Daily, comedian Patton Oswalt tweeted a perceptive one-liner review: "Steve McOrmond's new poem, Pure Outrage,' is really funny and, if you read it right, kind of scary." While at times these poems reach out from a place of isolation, across a distance greater than words, one always senses an earnest desire for connection and engagement: Here, take my hand. Maybe it's not too late.

"Creeping dread, bemused wonder, and a species of headlong incredulity inform Steve McOrmond's processing of the new century's prodigious cultural jetsam, its 'wilderness of signs'. Reckon apprehends the strangeness in the commonplace, and the anxiety humming in everyday chatter, fact and argument, whether it be live or digitized. 'What do they open, the keys that come rotoring down from the maple trees?' Turns out it's complicated." — Kevin Connolly

"The isolation and confusion of the modern age come to life in Steve McOrmond's new book Reckon in a way that is disquieting and strangely comforting at the same time." — Ron Sexsmith

Steve McOrmond is the author of three previous collections of poetry, most recently The Good News About Armageddon (Brick Books, 2010), which appeared on a number of book critics' Best of 2010 lists and was shortlisted for the 2011 ReLit Award. His second collection, Primer on the Hereafter (Wolsak and Wynn, 2006), was awarded the Atlantic Poetry Prize. His debut collection, Lean Days (Wolsak and Wynn, 2004), was shortlisted for the Gerald Lampert Award. Originally from Prince Edward Island, he lives in Toronto.

Other titles by Steve McOrmond

The Good News about Armageddon

Primer on the Hereafter