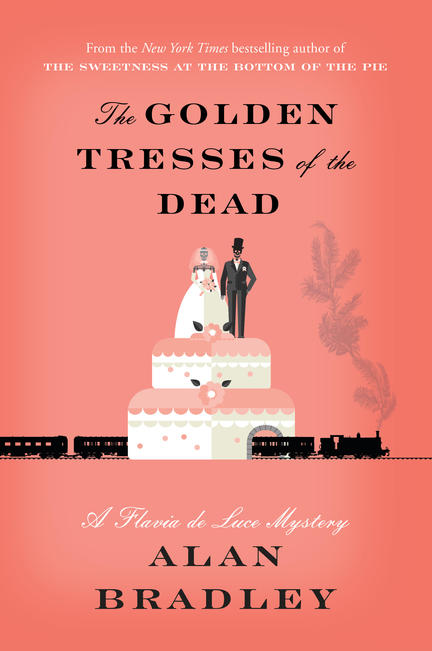 Flavia de Luce, the twelve-year-old chemist and amateur detective, is eager to turn professional. She and her father's valet, Dogger, have founded a detective agency, Arthur Dogger & Associates, and unexpectedly cut into their first case during the revelry at her sister Ophelia's wedding reception. After an eventful ceremony with a missing best man and spontaneous ventriloquist act, spirits are high as Feely and her new husband head for the towering and beautifully iced wedding cake. But as Feely slices into the first piece, a scream rings out--the bridal cake contains a severed human finger. Delighted, Flavia wraps the finger in a napkin and whisks it away to her chemical laboratory. By studying the embalmed skin, the indentation of a ring and the slope of the fingernail, she'll not only be able to determine the identity of the victim--but also point a finger at a killer.

Alan Bradley is the New York Times bestselling author of many short stories, children’s stories, newspaper columns, and the memoir The Shoebox Bible. His first Flavia de Luce novel, The Sweetness at the Bottom of the Pie, received the Crime Writers’ Association Debut Dagger Award, the Dilys Winn Award, the Arthur Ellis Award, the Agatha Award, the Macavity Award, and the Barry Award, and was nominated for the Anthony Award. His other Flavia de Luce novels are The Weed That Strings the Hangman’s Bag, A Red Herring Without Mustard, I Am Half-Sick of Shadows, Speaking from Among the Bones, The Dead in Their Vaulted Arches, As Chimney Sweepers Come to Dust, and Thrice the Brinded Cat Hath Mew’d, as well as the ebook short story “The Curious Case of the Copper Corpse.”

Excerpt: The Golden Tresses of the Dead (by (author) Alan Bradley)

I’d like to remark at the outset that I’m a girl with better than an average brain. Just as some people are given the gift of a singular and often quite remarkable talent—such as Violet Cornish’s uncanny ability to break wind to the tune of “Joy to the World”—I myself, in much the same way, have been blessed with the power of logical thinking. As Violet could easily confirm, it’s something you’re born with, and then improve by much practice.
The many occasions upon which I had been consulted by the constabulary had sharpened my already consider­able detection skills to the point where I had little choice but to turn professional. And so I had set up with Dogger, my late father’s valet, gardener, and all-round sounding board, a small agency to which we gave the name—to signal respectability—Arthur W. Dogger & Associates.
Little did we know that our very first case would be so close to home.
But I’m getting ahead of myself. Let me begin at the beginning.

Now, with a modest, maidenly backhand, Feely tossed her bouquet into the air. For a girl who could bowl a cricket ball with the best of them when she felt like it, it seemed a frail and puny effort.
Although Miss Lavinia and Miss Aurelia were both in their seventies, and well past the age when most females traipse to the altar, hope still burned eternal, apparently, in their respective withered breasts. These two ancient sisters shot off their respective shooting sticks like an­cient skyrockets, and fell upon the flowers as hounds upon the fox, clawing and hissing at each other as if it were a catfight rather than a celebration of Holy Matri­mony. Blows and several shocking words were exchanged. It was not a pleasant spectacle.
The real horror, however, was not to come until the reception.

"What follows in this 10th book is plotting and characterization as charming, amusing and original as everything that has gone before." —Toronto Star

"A winning tenth mystery." —People
"Bradley, who has few peers at combining fair-play clueing with humor and has fun mocking genre conventions, shows no sign of running out of ideas." —Publishers Weekly, starred review

"If ever there were a sleuth who's bold, brilliant, and, yes, adorable, it's Flavia de Luce." —USA Today

"Delightful. . . . A combination of Eloise and Sherlock Holmes." —The Boston Globe

"[Flavia] is as addictive as dark chocolate." —Daily Mail

Other titles by Alan Bradley

The Grave's a Fine and Private Place

As Chimney Sweepers Come to Dust

The Dead in Their Vaulted Arches

Speaking From Among the Bones

I Am Half-Sick of Shadows

A Red Herring Without Mustard

The Weed That Strings the Hangman's Bag

The Sweetness at the Bottom of the Pie