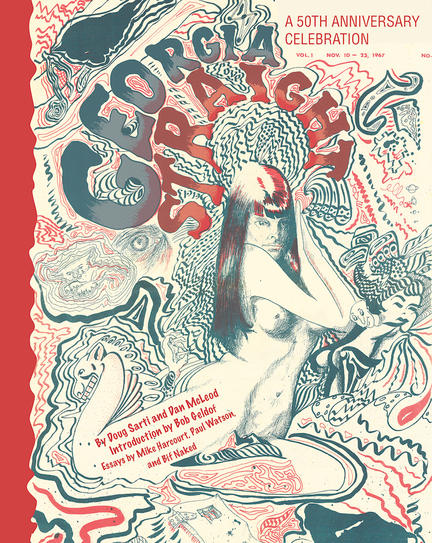 This highly illustrated and beautifully produced coffee-table book brings together over 100 of the Georgia Straight's iconic covers, along with short essays, insider details and contributor reflections, putting each of these issues of the publication into its historical context.

For 50 years the Georgia Straight has served as the voice of reason during a number of turbulent times. With fearless tenacity, the Straight has always taken the good fight to the powers that be, whether they come in the form of big business, city hall, the provincial legislature, parliament or just plain human folly.

While known for hard-hitting journalism and pointed prose, the Straight has also always been a purposely visual publication. With eye-catching design strongly reflecting the times – from ’60s psychedelia to new-millennium computer graphics – the newspaper has charted a course through both artistic trends and meaningful writing.

Together in one place for the first time, this collection of Straight covers spans five decades of newsworthy figures, events, issues and pop culture. A visual time capsule of sorts, it’s a significant graphic chronicle of both the counterculture and recent Vancouver history – after all, if it was important, entertaining or inspiring, the Straight covered it.

With work from a multitude of artists using various media and contrasting styles, this collection illustrates – literally – how the Straight was able to seize the moral high ground in the culture wars and turn civil disobedience into an art form.

Along with a sense of history, there’s a strongly ingrained emotional component to these old Straight covers: they’ve lost none of their power to evoke an impassioned response. Some are beautiful, some are funny, some will shock and some will enrage.

But they’ll all make you feel something.

Doug Sarti has been a feature and news writer for more than 20 years. During his time at the Georgia Straight, he has specialized in US politics, books, movies and pop culture – although over the years he has written for every section of the paper. A long-time student of history, both Vancouver and worldwide, Sarti is married and has a young son. During the summer, he coaches Little League baseball and is a sometimes successful shade-tree mechanic. He lives in Vancouver, British Columbia.

Mike Harcourt is a former Premier of British Columbia and Mayor of Vancouver who has maintained a lifelong commitment to the sustainable development of cities and communities. He is the author of City Making in Paradise and Plan B: One Man’s Journey from Tragedy to Triumph.

BIF NAKED was born in India and raised in the United States and Canada, spending many of her formative years in Winnipeg. After fronting the underground bands Gorilla Gorilla and Chrome Dog, Bif became a prominent alternative artist, performer and songwriter. Her striking image, friendly personality and powerful live performances have had her appearing in concerts and festivals around the world. She has also appeared on film and TV, on shows such as The Tonight Show with Jay Leno and Buffy the Vampire Slayer. Bif lives in Vancouver, B.C. Follow her on Twitter @bifnaked.

Dan McLeod, the Georgia Straight and its reporters and columnists … a platform for alternative voices who opposed the looming destruction of cherished neighbourhoods. The Straight was raided, sued, charged and harassed. Yet Dan and his gutsy band of journalists took on all comers.

Mike Harcourt, community activist, lawyer, former mayor of Vancouver and past premier of BC

The Georgia Straight is a giant national treasure and should – indeed, must – be honoured … a functioning monument to BC’s past, agitating in the present and making no apologies for the fact that it will continue to argue for a future uncontaminated by the infelicities of the Now.

Other titles by Mike Harcourt

Other titles by Paul Watson

The Epic Hunt for the Lost Franklin Expedition

Interview With a Pirate

25 Years On The Front Lines With The Harp Seals

Other titles by Bif Naked