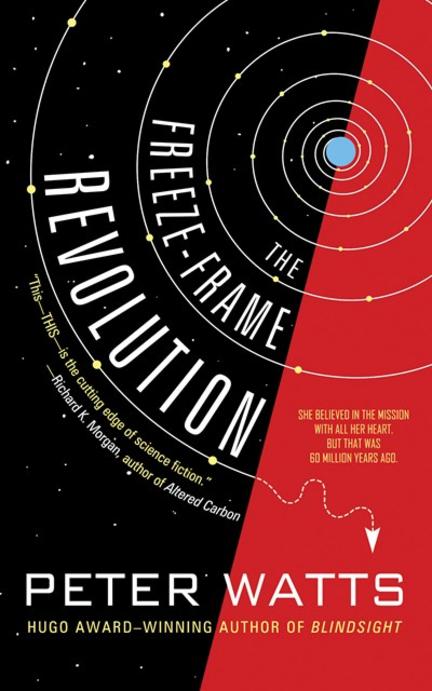 How do you stage a mutiny when you're only awake one day in a million? How do you conspire when your tiny handful of potential allies changes with each job shift? How do you engage an enemy that never sleeps, that sees through your eyes and hears through your ears, and relentlessly, honestly, only wants what's best for you? Trapped aboard the starship Eriophora, Sunday Ahzmundin is about to discover the components of any successful revolution: conspiracy, code—and unavoidable casualties.

Peter Watts is a former marine biologist and a current science-fiction author. His debut novel in the Rifters series, (Starfish) was a New York Times Notable Book, and his novel (Blindsight) has become a required text in undergraduate courses ranging from philosophy to neuroscience, and was a finalist for numerous North American genre awards. His shorter work, including Beyond the Rift, has received the Shirley Jackson, Hugo, and Aurora awards. Watts’s work is available in twenty languages and has been cited as inspirational to several popular video games. He lives in Toronto.

“The Freeze-Frame Revolution is a delicious morsel of hard science fiction . . . The setup of the book is irresistible, and the science is high-concept, but the story is driven by Sunday’s relationships and her conviction in herself and her companions.”
—Washington Post

“The Freeze-Frame Revolution (Tachyon), the shortest and latest novel from Canadian Peter Watts, is as brilliant and enticingly acute as any of his earlier and longer work.”
—Seattle Review of Books

“The Freeze Frame Revolution is the purest driven high concept SF . . . as vivid and carnal and profane as the headiest of high-end literature.”
—Richard Morgan, author of Altered Carbon

"This is definitely vintage Watts—outstanding, exciting, and terrifying.”
—Cory Doctorow, author of Little Brother and Walkaway

“The latest from Watts (Blindsight, 2006) packs a significant punch into a small package.”
—Booklist

[STARRED REVIEW] “In this short, tight novel that contains vast science-fictional speculation, the human crew of the construction ship Eriophora spends 66 million years building interstellar wormhole gates, so they have lots of time to ponder issues of purpose. Sunday Ahzmundin, on a quest to find a missing crewmate, has to deal with another coworker, Lian, who is traumatized after the ship is damaged by one of the “occasional demons” that pop out of newly opened gates. Dropping in and out of suspended animation as scheduled by the Chimp, the AI that runs the ship, Sunday begins to uncover the secrets behind Lian’s subsequent death and the disappearances of other crew members, learning what hides beneath the ship’s closed and rigidly structured society. Watts (Echopraxis) puts the concept of humanity under the knife, teasing out how Chimp’s programming and Sunday’s loyalty can both tie them together and set them at odds. Watts pits the drive toward success against the need for connection, leading to an ending as open and as expansive as the universe. SF fans will love this tale of bizarre future employment and genuine wonder.”
—Publishers Weekly

“A savvy, fast-paced, vivid mix of humans way off-planet, pounding biology, robotics, cyberpunk, and even music. That's right, everything you've come to expect and enjoy from Peter Watts, and maybe a little more. This is one of his best—short, unforgettable, highly recommended.”
—Paul Levinson, author of The Plot to Save Socrates and The Silk Code

“Darkness and awesome technology lurk in Peter Watts’new book, The Freeze-Frame Revolution.”
—Vernor Vinge, author of A Fire Upon the Deep

“In The Freeze-Frame Revolution, Peter Watts takes us millions of years into the future and hundreds of light-years away, where an isolated fragment of humanity must confront exotic physics, unfathomable entities, and the unforeseen consequences of their own technologies. But it is a profoundly human story about people, people not unlike us, under inescapable stress. A brilliant, thoughtful story bursting with radical ideas.”
—David D. Levine, author of the Andre Norton Award-winning Arabella of Mars trilogy

“A gripping story of a deep human future—the dependent relationship between human and AI tangles and grows with the delicious creep of suspense to the very last page. Watts is a poet when it comes to science. A pleasure to read.”
—Justina Robson, author of Keeping it Real

“The Freeze-Frame Revolution is a slow-motion rebellion as heart-stopping as any roller coaster ride and will delight readers across the science fiction spectrum. It was a joy to read and I found myself unable to put it down once I got started.”
—K. B. Wagers, author of Before the Throne and the forthcoming Farian War trilogy

“Peter Watts is a triple threat: exacting hard science extrapolation, an imagination that runs hot enough to give you contact burns, and a gift for thrusting his characters in situations that will expand the mind while shattering even the most guarded of reader hearts. In The Freeze-Frame Revolution, he puts a handful of fragile human beings into a mind-bending, explosive and utterly inhuman situation, and lights a ten-thousand year fuse. Unforgettable!”
—A. M. Dellamonica, author of Indigo Springs

“Watts takes familiar-seeming SF tropes and accelerates them towards lightspeed, until they become something chillingly other. A gripping tale where galactic timescales collide with biology and age-old human dilemmas.”
—Hannu Rajaniemi, author of Summerland and The Quantum Thief

“The most protracted battle of the minds ever—human vs machine. Brilliant.”
—David Marusek, author of Upon this Rock and Counting Heads

“Peter Watts has created a sci-fi work of art where every word is refined and has a purpose. I highly recommend this work to lovers of science fiction.”
—Infinite Text

“It's science fiction on a grand scale, covering countless millennia and light-years. It's a story that doesn't leave the reader comfortable, and it's terrific. But if you wanted comfortable, you wouldn't be reading anything by Peter Watts.”
—MT Void

“Watts, undoubtedly, is a genius.”
—Medium

“Peter Watts certainly knows how to keep you on edge . . . The Freeze-Frame Revolution is a fascinating novel.”
—Strange Alliances

“Watts is an original thinker and a bold storyteller, here at the top of his considerable form. This is one of the year’s best science fiction odysseys.”
—Intergalactic Medicine Review

“The Freeze-Frame Revolution marks the triumphal return of Peter Watts . . . Definitely one of the speculative fiction titles to read in 2018.”
—Fantasy Hotline

“The Freeze-Frame Revolution by Peter Watts is without a doubt one of the more engaging and original science-fiction stories I have read recently.”
Bookwormex

“This is a masterpiece of science fiction and has sold me that I need to read all Peter Watts that I can get my hands on.”
—Postcards from a Dying World

“The Freeze-Frame Revolution is an incredibly intelligent book with extremely in-depth characters and a story-line that actually makes you think, and it’s a book that when I read it, the entire time I'm just thinking "this is what science fiction looks like.”
—The Reading Life

“The Freeze-Frame Revolution is a slim book, but a fascinating read.”
—Geek Dad

“A masterpiece in its own right. It’s complex, detailed, impactful . . . I would recommend it to any science fiction lover.” 4.5/5 stars
—The Curious SFF Reader

“Peter Watts is some precisely engineered hybrid of Lucius Shepard and Gregory Benford, lyrical yet hard-edged, purveyor of sleek surfaces and also the ethical and spiritual contents inside.”
—Locus

“Known for his pitch-black views on human nature, and a breathtaking ability to explore the weird side of evolution and animal behavior, Watts is one of those writers who gets into your brain and remains lodged there like an angry, sentient tumor.”
—io9

“Watts ranges from huge-scale ideas (“The Island,” with a living membrane surrounding a star) to the immediate (what if airport scanners grew sophisticated enough to detect even potential criminals, in “The Eyes of God”)? He asks the questions that the best science fiction writers ask, but that the rest of us may be afraid to answer.”
—Chicago Tribune

“A sharp and incisive stylist with a rather tragic, if clear-eyed, view of human nature, and the capacity for some remarkable hard-SF inventions.”
—Locus

“It seems clear that every second Peter Watts is not actually writing must be spent reading, out at the cutting edge of all the sciences and all the arts at once.”
—Spider Robinson, author of the Callahan Series

“Holding himself to a higher standard of storytelling, Watts uses the effects of mainstream sci-fi, yet continually aims at something deeper in humanity and society’s soul.”
—Speculiction

Other titles by Peter Watts